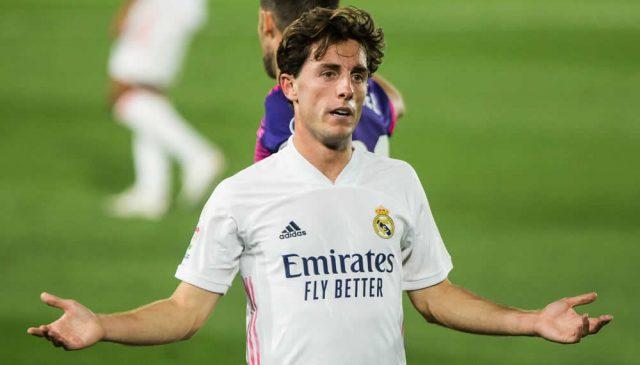 Real Madrid defender Alvaro Odriozola could be on the brink of leaving the Santiago Bernabeu for the second time since his signing from Real Sociedad in the summer of 2018.

The 25-year-old was part of the treble-winning Bayern Munich team last season, having joined the German side for the second half of the 2019/20 campaign.

Odriozola returned to Madrid with the view of getting more playing time this season, especially after the sale of Achraf Hakimi to Inter Milan in the summer, paving way for Odriozola to become the main backup for Dani Carvajal. However, the Spain international has failed to establish himself as such with injuries causing him to be on the sidelines for most of the campaign.

He has been restricted to just one appearance across all competitions this season, with Lucas Vazquez normally preferred by manager Zinedine Zidane to occupy the right-back position when the void is left by Carvajal.

With his limited game time, the player is said to be considering a loan move away from the Spanish club with Italian Serie A side Fiorentina reported being keen on signing him for the remainder of the season.

The right-back is also said to have declined the idea of a permanent transfer away from the Bernabeu, per reports from Sky Sports.

Though the player is reluctant to leave Spain in the winter market once again, the Serie A team are said to be in discussions with his entourage in order to convince Odriozola to accept the move to playing in Italy, where Borja Mayoral, another Madrid loanee has been grabbing the headlines since moving in the summer.