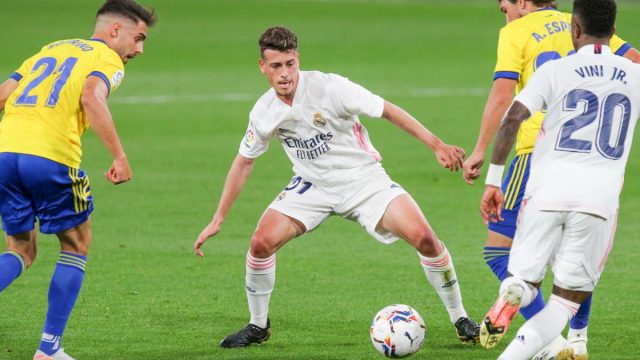 Antonio Blanco, in the midst of injuries as well as the Covid-19 contracted by Federico Valverde has become the biggest beneficiary of the opportunities available.

The midfielder made his debut in the 0-0 draw against Getafe in mid-April and looks to have convinced Zinedine Zidane enough to still be with the squad.

Blanco had been in the limelight for quite a number of times but he first gained the attention when he was given the opportunity to take part in the photoshoot for the unveiling of the 2020/21 kits for the club.

For someone whose only biggest responsibility comes as being the vice-captain of the Real Madrid Castilla team, taking part in the shoot was a sign that the club has high hopes for him.

Fast forward to the closing stages of the season and Blanco has been a solid member of the first team featuring in the last four league games, starting two and twice coming from the substitute bench.

His continuous exposure could me that the club focus on spending on other areas rather than trying to get a replacement for Casemiro in the summer market.

Eduardo Camavinga had been a long-standing target for the Los Blancos, and was seen as a long-term replacement for Casemiro should the club persevere with their plans to sign him.

However, the stance could be about changing with the increasing game time given Blanco and the trust he has got from his manager.

For someone who has been playing for Madrid since age 13, the now 20-year-old definitely understands what it means to don the famous white jersey and he could be buying himself more game time should he continue to deliver the simple things expected of him.

It still may be early days yet, but Blanco could be heading for a long career at the Santiago Bernabeu with the presence of Casemiro, Toni Kroos and Luka Modric all around to guide him – and perhaps that could mean the club save a lot of money that would be expected to be used in buying a defensive midfielder.