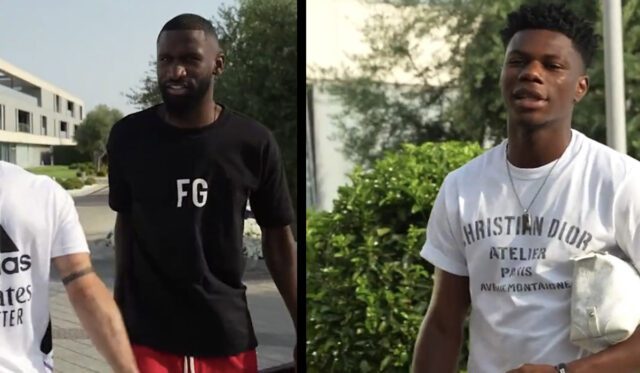 The new season is not far from the reach of football fans and the feeling around the Spanish capital of Madrid is a positive one, especially in the camp of Real Madrid, where Antonio Rudiger and Aurelien Tchouameni have started training with the club.

The pair were signed earlier in the summer with Rudiger arriving from Chelsea as a free agent while Madrid forked out a hefty package to acquire the services of Tchouameni from AS Monaco.

Rudiger is expected to bring experience and character to the Madrid defence that fought all the way to secure a 14th UEFA Champions League title last season.

The Germany international scored and impressed in the quarter-final encounter with Madrid while playing for the Blues, prompting the Los Blancos to act quickly.

Tchouameni’s transfer looked like something that the club was unwilling to pursue this summer until the deal to sign Kylian Mbappe failed to materialise.

The France international is regarded as one of the best midfielders in the world even at a younger age and be a long-term replacement for Casemiro in the coming years.

The pair reported for the first day of training on Thursday, July 14, as Carlo Ancelotti and his charges prepare for the season ahead.

Madrid’s first pre-season game in the USA will be against Barcelona at the Allegiant Stadium in Las Vegas. It will take place on Saturday, July 23, and is one of the most anticipated matches of the tour.

The rivalry between the two teams is one of the fiercest and longest standing in football. When they meet every year in El Clásico, it is one of the most watched sports events of the year. That energy and intensity should produce an exciting match in Las Vegas.