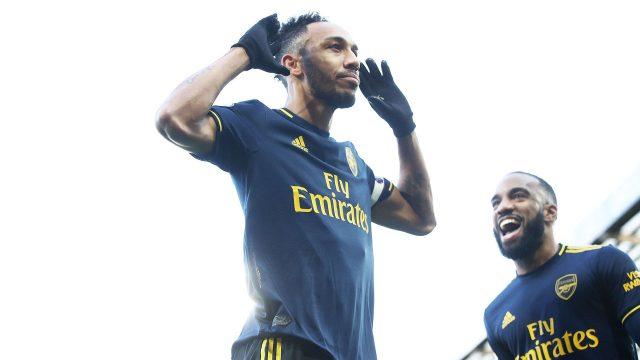 Pierre-Emerick Aubameyang’s future at Arsenal has been uncertain for many weeks now and remains unclear whether the player would sign a new deal.

According to reports from Spain and England, Real Madrid is one of the many clubs who are looking to sign him in the summer should he decide to leave the Emirates.

Aubameyang has been a great admirer of the Los Blancos since his early days and made it clear he would want to play for the Spanish giants.

“Before he died two years ago I promised him that one day I would play for Real Madrid,” Aubameyang said in 2016 on the promise he made to his grandfather. “My grandfather was from Avila, not far from Madrid. It’s what I said to him.

“I know it’s not easy but it’s something I keep in mind. I celebrate my goals with a cartwheel in honour of Hugo Sanchez.

“I’ve seen many videos of him on the internet and I’ve been following him since I was a boy.”

Zinedine Zidane has not been too convinced with neither Mariano Diaz or Luka Jovic, and both players could be up for grabs in the summer.

Madrid are linked with Borussia Dortmund’s Erling Braut Haaland but any deal seem unlikely for now having seen the player just joined the German outfit in January.

Aubameyang could be a short term fix for Madrid as he could provided the needed competition for Karim Benzema who has been an undisputed starter at the Santiago Bernabeu.

At thirty, Aubameyang could prove to be an interesting competition for the Frenchman and could also provide a whole new dimension to the team with his style of play.

The Gabon international is a well-placed target for Zidane to count on, having enjoyed a run of superb goalscoring form for the last five years, and his administration for the famous white jersey should be a plus for the La Liga side.

Barcelona are also said to be monitoring the situation of the 30-year-old with hopes of adding him to their star-studded attacking options.