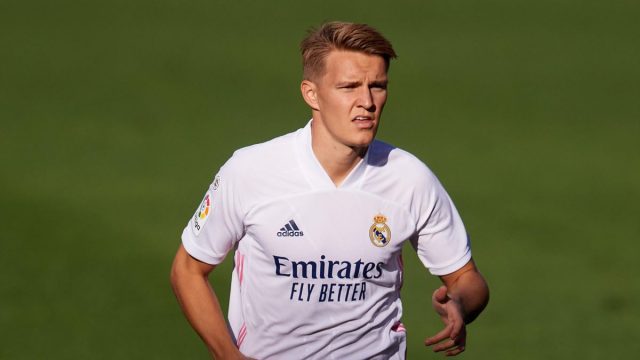 Martin Odegaard could be the next player in line for a transfer away from the Santiago Bernabeu in the January transfer window, according to increasing reports.

The Norway international has not received quite enough playing time as was the case during his loan spell at Real Sociedad, where he engineered the club to gain a European qualification for the 2020/21 season.

Per the latest developments, Arsenal and Real Sociedad are leading the chase for the signature of the 22-year-old, who is keen to enjoy the next six months away from the Spanish capital.

The talented playmaker is counting on the club’s hierarchy to permit him to secure a loan move away from the club in search of regular playing time as he looks to build his confidence once again.

Odegaard showcased his impressive performances while on loan at Sociedad during the 2019/20 season, notching up seven goals and nine assists in 36 appearances across all competitions for the La Real side.

He was also expected to enjoy another loan spell at the Basque club before Madrid decided to integrate him into the first team.

Martin Odegaard has struggled for game time under Zinedine Zidane this term, making just seven appearances in the Spanish La Liga with only three being as a starter.

A move to Arsenal is regarded as many as the best option for him due to the football nature at the London club, with manager Mikel Arteta also in need of a natural playmaker for the No.10 role.

However, they will need to fight off competition from both Real Sociedad and Sevilla, who are also monitoring the situation of the player while Leicester City also credited with an interest.