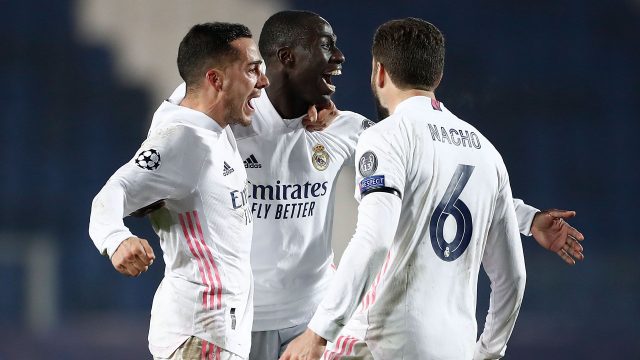 Ferland Mendy scored the only goal of the game when Real Madrid traveled to Italy to play Atalanta in the round of 16 tie of the UEFA Champions League.

Atalanta started the game the better side in the early stages but were unfortunate to be on the receiving after midfielder Remo Freuler was shown the red card after 17 minutes.

The Switzerland international was harshly sent off after bringing down Mendy, who had been played in goal by Vinicius Junior at the edge of the box.

Atalanta’s evening moved from bad to worse when Duvan Zapata came off with a hamstring injury moments later as Mario Pasalic came on as his replacement.

Despite having one man to their advantage, Zinedine Zidane’s side struggled to penetrate through the defence of Gian Piero Gasperini’s team.

Casemiro, Nacho and Vinicius all had the chance to open the scoring in the first 45 minutes but they were unlucky to see their efforts not threaten the home side’s goalkeeper.

The same was the narrative after the recess until the 86th minute where France international Ferland Mendy curled a beautiful effort into the right top corner to give Madrid the lead, beating Pierluigi Gollini from outside the box.

After missing out on the quarter-finals in the last two seasons, the Los Blancos will go into the second leg hoping to utilise their victory in Bergano.