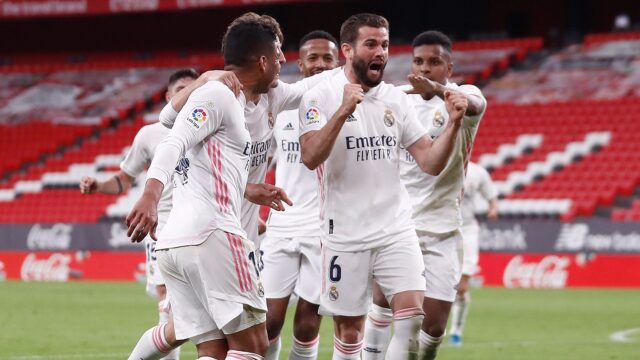 Nacho Fernandez‘s goal could be Real Madrid’s most important goal of the season as they beat Athletic Bilbao by a goal to nil at the San Memes Stadium on Sunday.

Madrid went into the game needing a win at all cost to stay in the race for the 2020/21 Spanish league title as they were two points behind Atletico Bilbao.

With all games being played at the same time, the Los Blancos had their destiny in their own hands and were hoping Osasuna, playing against Atletico would do them a favour by taking points of the league leaders.

Bilbao were the closest to opening the score in the opening encounters of the game after Jon Morcillo saw his effort from the edge of the penalty box parried away by goalkeeper Thibaut Courtois.

Prior to that, Madrid had a penalty shout waved away by referee Mateu Lahoz after Alvaro Odriozola’s cross looked to come against Morcillo’s arm.

Casemiro also saw a header from a tight-angle beat goalkeeper Unai Simon but the crossbar was on hand to deny the Brazil international.

However, that was far from denting the hopes of the Madrid players who kept fighting until their efforts paid off in the 68th minute. Casemiro played a ball across the face of the goal which came off Nacho before going into the net.

Atletico on the other hand came from behind to beat Osasuna by two goals to one courtesy of an 88th-minute strike from Luis Suarez.

Real Madrid will now have to win their last league game against Villarreal and hope Real Valladolid draws or beats Diego Simeone’s men.