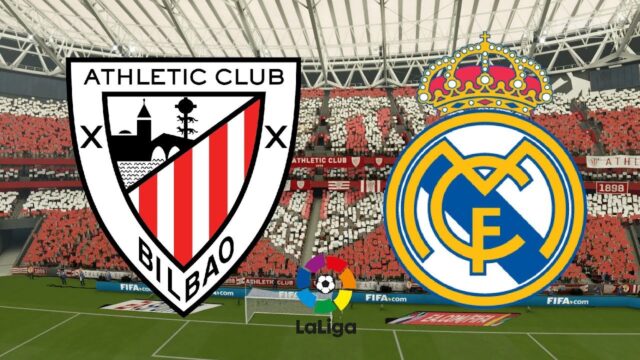 With two games to be played in the remainder of the season, Real Madrid cannot afford to slip up over the weekend. Zinedine Zidane’s side faces off with Athletic Bilbao at the San Mames knowing that anything but a win will dash their hopes of retaining the La Liga title they won last year.

The Los Blancos are two points behind league leaders Atletico Madrid, who will also come up against Osasuna in their next game.

In their last league game, Madrid made soft work of Granada, going on to win 4-1 away from home thanks to goals from Luka Modric, Rodrygo Goes, Alvaro Odriozola and Karim Benzema.

Bilbao on the other side succumbed to a 1-0 defeat to Huesca in their last league game with Sandro Ramirez scoring the only goal of the game in the 61st minute.

Madrid are yet to lose any of their last five games against Bilbao at the San Mames stadium while their last defeat against the Basque club came during the 2021 Spanish Super Cup.

Zidane’s men beat Bilbao by 3-1 goals to one in the earlier league fixture at the Alfredo Di Stefano Stadium and they will be looking to keep the title race going until at least the last game week.

Marcelino has a huge number of injury concerns to deal with ahead of the game. Iker Muniain, Inigo Lekue, Ander Capa, Yuri Berchiche and Oier Zarraga are all ruled out of the game while Dani Garcia is also considered as a doubt.

Zidane faces the same plight as that of the Bilbao head coach. Sergio Ramos, Lucas Vazquez and Dani Carvajal are all out for the rest of the season. Ferland Mendy was involved in an individual training but looks likely to miss the game alongside Raphael Varane. Toni Kroos is in quarantine after coming into contact with a positive patient for coronavirus.

OFFICIAL: Toni Kroos in isolation due to Covid-19 protocol