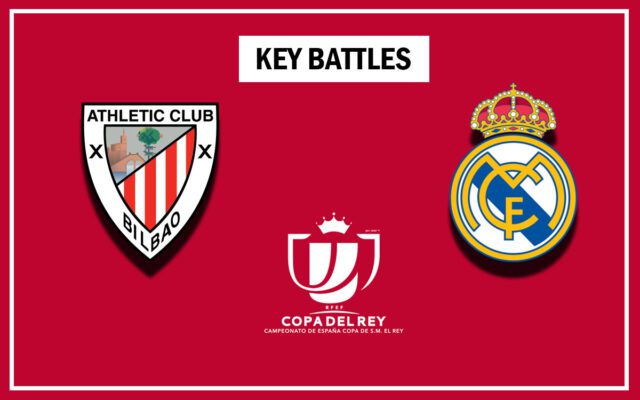 This year’s Copa del Rey campaign has been an interesting and competitive one as many sides including Real Madrid have shown their willingness to clinch the trophy.

Real Madrid travel to San Mames to face the Athletic Club in the quarterfinal of the competition.

After beating Athletic Club in the finals of the Spanish Super Cup, Real Madrid will be eyeing another trophy to add to their trophy cabinet in the 2021/22 season campaign.

A lot is expected in this tricky and interesting fixture. The Los Blancos have won the Copa del Rey 19 times and a win against Athletic Club places them in the Semi-finals of the competition.

Here, we would take a look at some interesting key clashes that would have an influence on the game.

Since 2018 Unai Simon has made his debut for the Athletic club, he has established himself as the first choice Goalkeeper and have won many hearts of fans. The fantastic young goalkeeper would be a key influence in this game. His ability to play with his feet and locate his players when necessary on the field will be key to help Athletic Club keep possession.

Despite being young, he portrays the confidence of a good goalkeeper and has been top of his game for many years.

Thibaut Courtois has also been impressive after having challenges in adaptation in his first season at Real Madrid. Since then he has been top-notch in the post, making top saves. He has saved Madrid many times from losing this season. His presence in this encounter would be very key for the Los Blancos to progress to the next stage. The Belgian has been in the post 30 times for the club this season and has conceded 25 times, making a total of 85 saves and keeping 12 clean sheets this season.

Inigo Martinez is an integral member at the heart of defence for the Athletic Club. The experienced Spanish Centre back’s inclusion could prove to be the difference in such a tough fixture. He can sometimes be used as a left-back. Martinez brings composure and calmness to the backline of Athletic. He’s a proven ball-playing centre back and he would be needed to stop Real Madrid from scoring in this encounter.

David Alaba is one key player Madrid would be counting on. Alaba over the past years has shown his versatility in playing several positions on the field. He has been a solid addition to the team since arriving from Bayern Munich in the summer. The Austrian can play a role in helping Madrid lift the trophy for the first time in a long while.

Iker Muniain is expected to captain the side when they face Real Madrid. His decision making and technical abilities on the ball would be once again key for their possession in this fixture.

Luka Modric over the years has shown that he’s certainly one of the best in his position. The former Ballon d’Or winner is a player to watch in this match. The mercurial midfielder has featured 24 times for Madrid this season and scored two goals and assisted 4 times. And over the years has shown that he can play anywhere in the midfield. His work rate in Real Madrid set up is very high and undisputed. He’s a team player who adds a lot of energy to the midfield. The 37-year-old has achieved a lot for Real Madrid and would be looking forward to producing a very good performance when they meet Athletic Club.

Inaki Williams could be the Athletic club’s greatest weapon to harm Real Madrid in this fixture. A lot is expected from the striker. He has spent 5 seasons with Athletic Club and has produced 67 goals in 296 matches. He is pacy and versatile to play across the forward line.

Karim Benzema will certainly be the biggest star in this encounter. The classical number 9 currently this season is in a form of his life and he has been touted as a candidate to win the next ballon d’Or. Benzema has produced 24 goals, 6 assists in 28 games played so far for Real Madrid this season making him a threat to any opponent he faces. He’s tricky upfront and will pose a great danger for the back four of Athletic Club.

The match is expected to be played on Thursday, 3rd February 2022 at the San Mames at exactly 8:30 pm.