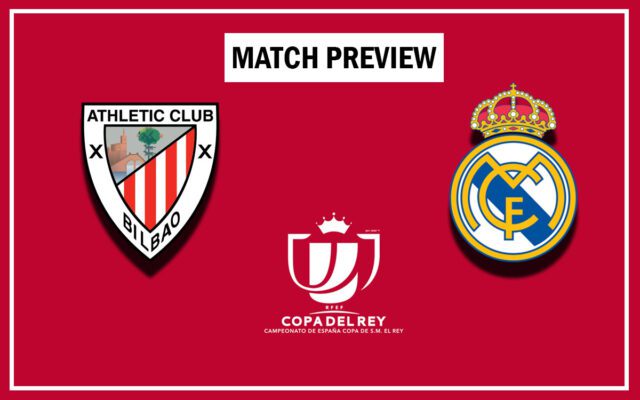 After a short break, Real Madrid will return to action on Thursday, where they face Athletic Club in the quarterfinal of the Copa del Rey.

This will be the fourth game between Madrid and Athletic this season having already met in the Spanish La Liga and the Spanish Super Cup final.

Madrid have won all three games, keeping two clean sheets in the process while conceding just one.

Real Madrid progressed to the last eight of the competition after seeing off Elche in the previous round while Athletic also beat Barcelona in extra time to also advance to this stage.

Carlo Ancelotti’s side are on a strong run to end their drought in the cup competition, with his players wanting to win ‘all’ titles available to them this season.

The game on Thursday, February 3, will take place at the San Memes. The last meeting there saw the Los Blancos end the game with a 2-1 victory with Karim Benzema scoring both goals.

Marcelino’s side had no effect from the international break as none of his players was called up. The manager should have his full squad available for the game against Madrid at home. Though Unai Vencedor’s hamstring injury will likely rule him out of the encounter.

Ancelotti’s squad was hampered with Casemiro, Vinicius, Rodrygo Goes, Federico Valverde and Eder Militao all going on national duty. However, the players have returned back in time for tomorrow’s game although it is uncertain if the manager will give them a starting role.

Karim Benzema is a huge doubt for the game after failing to train with the team since the knock picked up in the draw with Elche. Marcelo’s absence is also due to a lengthy suspension.

Ferland Mendy also picked up an injury on Monday and has been ruled out for the game. He is likely to return in time for the UEFA Champions League tie against Paris Saint Germain.

During his press conference, Ancelotti never ruled out Benzema but the France international is also unlikely to be risked in this game considering the number of games still ahead to be played. Vinicius Junior becomes the player to step up for the club this time around.

The player was in action for Brazil in their game against Paraguay in the early hours of Wednesday but his involvement against Athletic is not ruled out. He has been one of Madrid’s top performers this season, adding goals and assists to his game.

Ancelotti can count on his to do the damage against the Basque club.

One of the consistent players for Athletic, Inaki Williams only needs to be prolific in front of goal. The forward has led the forward line for Marcelino’s men all season and would need to be at his best to help his side beat Madrid.

His ability to hold defenders and make intelligent runs in the opposition’s half is something that the Los Blancos should be wary of on Thursday.