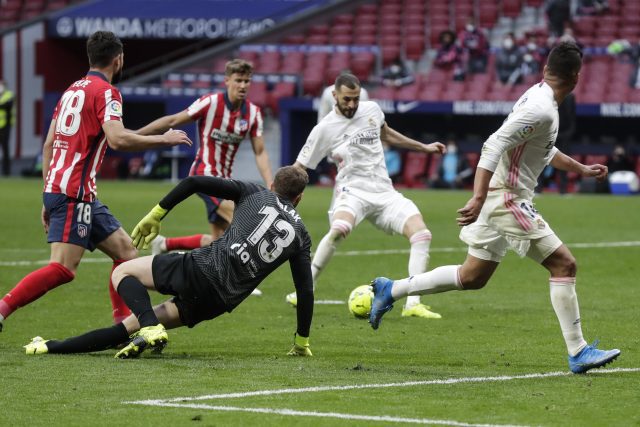 Karim Benzema secured a vital point for Real Madrid over the weekend when they played away from home to rivals Atlético Madrid.

Atletico Madrid were hoping to stretch their lead at the top of the La Liga table on Sunday and opened the scoring in the derby after 15 minutes played.

Real Madrid felt they should have been awarded a penalty in the 42nd minute when Atletico centre-back Felipe’s hand came into contact with the ball but referee Hernandez Hernandez rejected the appeal after using the VAR.

After the recess, Zinedine Zidane introduced Vinicius Junior and Federico Valverde into the game to give his side different options but they still failed to achieve the needed result.

However, with two minutes to go until the final whistle, Benzema’s good link-up play with Casemiro enabled the Los Blancos to get into the penalty box of Atletico with the Brazilian setting up the Frenchman.

Benzema’s 13th league goal of the season earned a hard-fought point for Real, though it still leaves them in the third position, two points behind Barcelona and five behind their noisy neighbours.