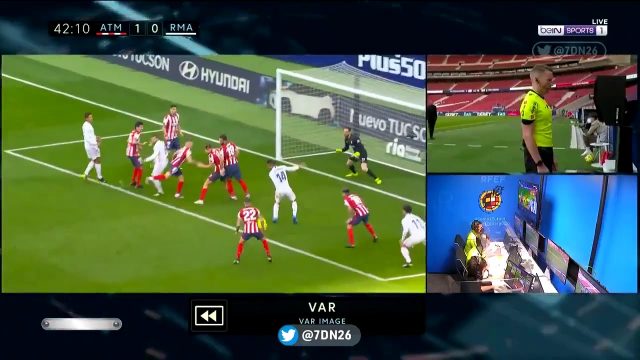 Atletico Madrid has decided to hit back at Real Madrid over the latter’s complaints over referee Hernandez Hernandez during the 1-1 game over the weekend.

Real felt they should have been awarded a penalty after Atletico defender Felipe’s hand was seen to have made contact with the ball earlier before the Los Blancos scored their equaliser.

“They criticize even the right decisions. Some people are used to having the wind behind them,” a tweet from Atletico’s page read. Real Madrid’s spokesperson Emilio Butragueño was the man leading Real’s efforts, saying that “once more, Real Madrid were not lucky with Hernandez Hernandez.”

In the majority of the incidents where the referees in charge of the VAR have told the centre referee to make use of the monitor during the league games, the main referee had sided with the orders but Hernandez Hernandez’s case was a bit different on Sunday.

He failed to award Zinedine Zidane’s side a penalty even after watching the video on the sidelines.

Luis Suarez and Karim Benzema both scored for their respective side as they shared the spoils at the Wanda Metropolitano Stadium.