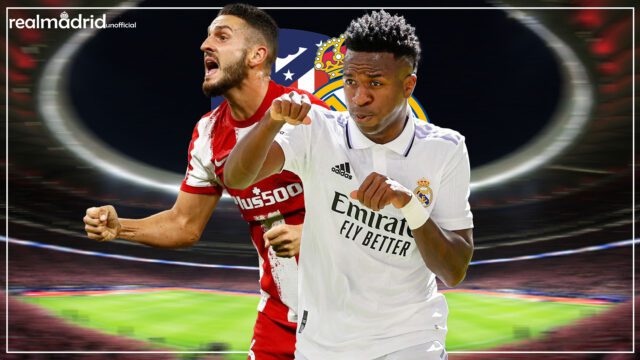 There is so much history around these two top clubs based in Madrid. Over the years, the Los Blancos have shown their pedigree and have won several matches when these two sides meet, stamping their authority over their city rivals.

Atletico Madrid haven’t been bad since the commencement of the league campaign, placing 7th on the league log with 10 points. A total of 5 points separates themselves and Real Madrid on the league table.

In the last 3 previous meetings the two sides have met, the Los Blancos have lost once, won once and drew once. This shows how competitive this fixture has been over the years. A difficult and tricky encounter which promises to be entertaining awaits us on Sunday.

Real Madrid will need to continue their good form since the start of the season to win this fixture as they are aware a drop in points will lead to Barcelona moving to first on the league table. A lot is at stake in this showpiece.

Our focus will be on some key clashes that could be the deciding factor of the game.

A battle between two fantastic shot-stoppers. Both keepers are key figures in their respective teams. In big games like this, you need goalkeepers like this to keep the poles safe. Courtois since joining Real Madrid have been very vital especially after he spent a year with them. There have been numerous occasions in matches that he has produced match-winning saves for the club.

Definitely, he would be in between the sticks for Real Madrid. The same can be said about Jan Oblak. A quality goalkeeper who positions himself very well to face opponents. He’s so good at stopping shots from a far and in 1v1 situations. He has been a key player for Atletico Madrid over the years.

Another key clash we can pay attention to is the midfield battle between the two sides. Modric will certainly cause havoc to the ATM side from midfield areas. He has the ability to score goals too as he has been showing us on the field of play. A midfielder who moves a lot and dictates the pace of the game when needed. Modric has been one of the standout performers for Madrid so far this season. He has scored 1 in La Liga this season. This makes him the number 38 scorer in the La Liga so far. His conversion rate for shots to goals is 33.

Luka Modric has 1 assist this season and has a total of 7 chances created. With these statistics, he ranks 10th in La Liga. He has also won 5 aerial duels and 14 tackles. On top of this, he made a total of 1 block.

For Koke, he has been very key for ATM over the years. The skipper will be needed in this game and his inclusion can be a deciding factor for his side. He controls the midfield very well and also dictates the play for his team. With his assist against Celta Vigo, Koke has now provided 100 assists in 551 appearances for Atlético de Madrid in all competitions. He is amongst the midfielders who add goals to their play. He has scored 47 goals for Atletico Madrid in all competitions. He’s One game away from becoming the player with the most appearances in the history of Atlético Madrid along with Abelardo Rodríguez (553).

Vini Junior is expected to start the game against ATM. The young Brazilian sensation has been outstanding since Carlo Ancelotti’s arrival. He’s once again expected to step up and help his side secure a victory over their city rivals on Sunday especially as club skipper Karin Benzema isn’t available for selection due to injury. He has scored 4 goals in La Liga this season in the 5 matches he has played. This makes him the number 4 scorer in La Liga so far. His conversion rate for shots to goals is 45. He’s a very dangerous pacy winger who stretches the opponents’ defense and runs very well in between opponents’ defensive lines.

Alvaro Morata who happens to be a former player for Real Madrid has also had a bright start since the start of the 2022/23 campaign. The 29-year-old Spaniard has scored 3 goals so far this season, playing a total of 378 minutes. Alvaro Morata scores an average of 0.71 goals for every 90 minutes that the player is on the pitch.

He’s certainly a player Real Madrid should watch out for in this encounter.

The match will be played at the Santiago Bernabeu on Sunday, 18th September 2022 at exactly 5:00 pm.