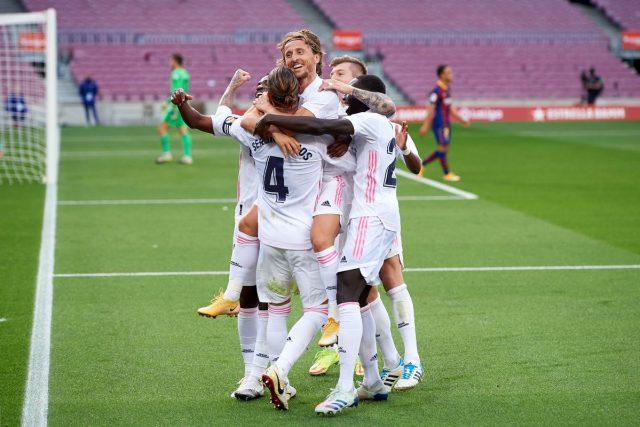 Real Madrid bounced back from their successive losses on Saturday afternoon following their 3-1 win over Barcelona.

The game, which took place behind closed doors at the Nou Camp came at the right time for Zinedine Zidane’s men, who had suffered two back-to-back defeats at the hands of Cadiz and Shakhtar Donetsk respectively.

Federico Valverde, Sergio Ramos and Luka Modric were all on the scoresheet for the away side while Ansu Fati continued his scintillating form to the start of the 2020/21 campaign.

The win sends Madrid back to the top of the Spanish top flight while Barcelona drop down to the 12th position on the league log.

Los Blancos opened the scoring after just five minutes into the game with Karim Benzema setting up Valverde, who made no mistake inside the penalty box and powered his side into the lead.

That lead however lasted for three minutes with Ansu Fati tapping home Jordi Alba’s square pass to level proceedings and become the youngest goalscorer in the history of the El Clasico.

Madrid’s injury concerns struck again with Nacho Fernandez being forced off as Lucas Vazquez replace his country man before the half time break.

After reviews on a shirt pulling in the penalty area, the VAR rewarded Madrid with a penalty in the 63rd, which Ramos stepped up confidently to convert from the spot.

Modric, who replaced Valverde in the course of the game also had the chance to put the game to bed in the 90th minute and the Croatia international made no mistake after twisting and turning Neto in the Barcelona goal.

The win lifts a bit of pressure off Zidane and leaves his side in confident mood ahead of their second Champions League game next week against Borussia Mönchengladbach before facing Huesca in their next league encounter.