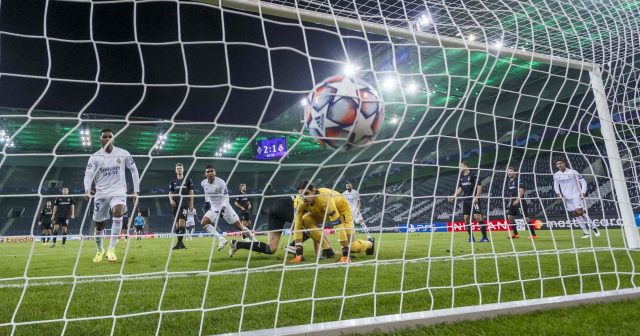 Real Madrid fought a good fight in their second group game of the 2020/21 UEFA Champions League campaign to secure a draw against Borussia Mönchengladbach.

Goals from Karim Benzema and Casemiro in the last 5 minutes of the game ensured that the Spanish giants left Germany with at least a point.

Los Blancos came into this game at the back of a convincing 3-1 win over Barcelona during the weekend and were looking in a better shape compared to their games against Cadiz and Shakhtar Donetsk.

While Mönchengladbach also beat Mainz 05 by three goals to two in their last game before this encounter.

This game started with Madrid threatening for the majority of the first half with Marco Asensio, and Benzema all testing Yann Sommer in goal for the home side.

However, it was Marcus Thuram who opened the scoring for Marco Rose’s side after 33 minutes into the game – finishing neatly after being played through by Alassane Plea.

Madrid finished the first half trailing by a goal to nil against the German Bundesliga side but there were so much optimism going into the break.

The Spanish side came back from the break and dominated the game once again with Asensio coming close this time only to be denied by the goalpost.

10 minutes into the break, Thuram grabbed his second goal of the night to double Mönchengladbach’s lead and looked on course to hand Madrid another defeat in the group stage.

Zinedine Zidane brought on Luka Modric and Eden Hazard after 70 minutes played, with the latter making his first appearance this season.

Their introduction changed the tempo of the game and gave Madrid more opportunities to throw all attack on the opponents.

Benzema pulled one back for the away side on the 87th minute from a well-taken bicycle kick after Casemiro had headed the ball into his path.

Casemiro turned the hero on the night shortly by tapping how Sergio Ramos’ pass to make it two apiece on the night.

The draw means Madrid have taken their first point from two games played so far and face Inter Milan in their next Champions League group game.