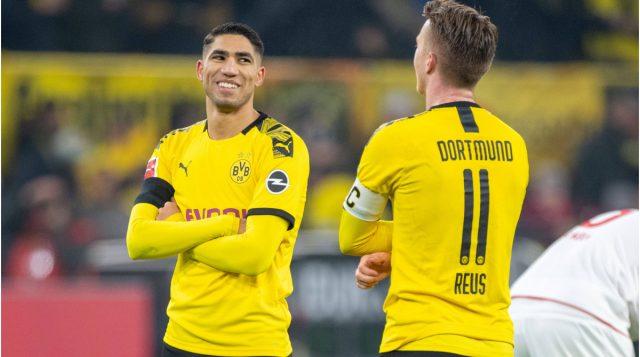 Bayern Munich have stepped up their pursuit of Real Madrid and Borussia Dortmund right-back Achraf Hakimi this summer.

The imminent German champions are understood to be a huge fan of the 21-year-old whose two-year loan spell at the Signal Iduna Park comes to an end at the end of this current campaign.

Hansi Flick’s side are said to be well prepared to spend heavily on the transfer fee and the player’s wage to get their target.

Hakimi, who has been confirmed to be returning to the Spanish capital at the end of his loan is also said to be open to a move to Bayern for two main reasons.

The first being that he gets that chance to have a huge improvement on his current pay packet at both Madrid and Dortmund, with Bayern reportedly ready to offer around €6 to €7 million a year after tax. Which is a huge increase for the Morocco international.

Also, the chance of staying in the Bundesliga, which has seen him grow massively as a player, interests him. At Bayern, he gets to play in a league which he has adapted very well to and should not encounter difficulties trying to settle in another team’s set up.

The 21-year-old’s performances during his two-year loan spell has caught the eyes of the Santiago Bernabeu coaching staff who are reading to bring him back into the team. There are no guarantees that Hakimi will be a starter at Madrid considering how Dani Carvajal has grown into the team. And the young right-back is not open to accepting a back up role at the club.

Should the player insist on not coming back to understudy Carvajal, it would prompt a sale which the club are not ready to let him leave on the cheap, despite the financial crisis of the coronavirus pandemic. It is reported that the Spanish club will demand at least €60 million for the player and Bayern are willing to offer such amount.

However, Dortmund have also offered another option of taking the player on loan for another year. This will give Madrid the option of allowing Hakimi to continue his development at the Signal Iduna Park before coming back to slot in at right-back in the summer of 2021.

Manchester United, Inter Milan and Arsenal are all credited with interest in the player ahead of the transfer window.

David Alaba: “Real Madrid were at the top of my list”