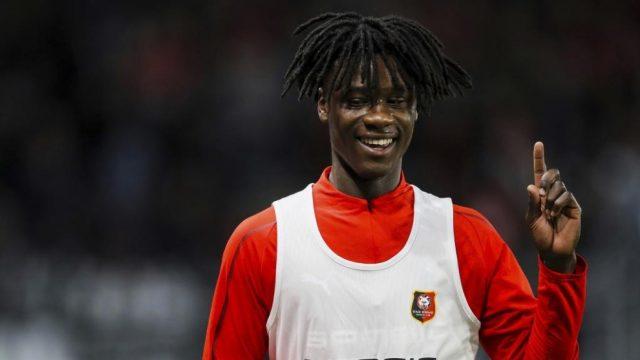 Eduardo Camavinga has responded to reports linking him with a move away from France, insisting that he is doing well at Rennes.

The 17-year-old has been a subject of interest for many top clubs in Europe having guided Rennes to Champions League qualification this season.

However, the player is not fazed with any headache as he is relaxed and remains focused on developing himself at the French club, while also helping them to achieve their targets.

“Honestly, I don’t focus too much on that,” the player said. “Certainly, it’s nice that big clubs like the ones mentioned are interested in me, but conversely, I’m not too interested in that. Especially since I am doing well at Rennes.

“We’ll see what happens next, I’ll let my parents and my agents manage this.

“I don’t look too much, but I see anyway. In fact, I can’t avoid it. Sometimes, I’m quickly on social networks and I see things or friends send me articles.

“Once, in Amiens in the League Cup, an opponent said to me: ‘We have to exchange our shirts before you go to Real Madrid.’ But I didn’t really want to joke, we had just been eliminated. After that, I thought about it, I laughed about it.”

Camavinga has also rebuked reports that there was an agreement for Rennes to put him up for sale along the season with a clause extending his stay if they qualified to the Champions League.

He said: “Everything about negotiations and discussions during the season is really none of my business. When the season starts, I focus exclusively on football, I let my agents and my parents settle everything else and then we talk again at the end of the season, when necessary.

“But if there had been such an important agreement in mid-season, frankly, I would know. My future, we will see at the end of the season.”

Madrid are keen on the services of the teenager, and despite his claims, Florentino Perez together with his board will try to buy him from France.