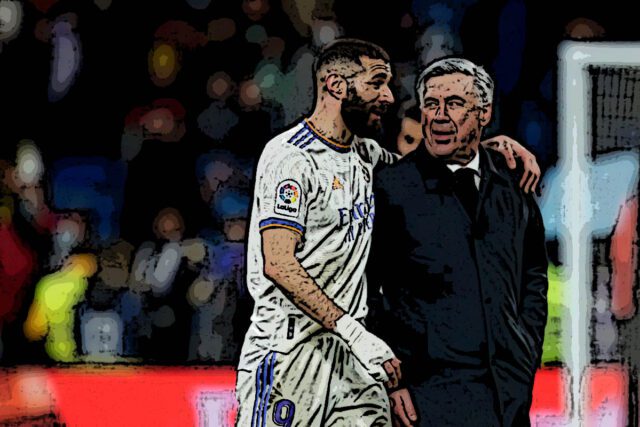 As Real Madrid finished their twenty-seventh La Liga game of the season, a day before the 120th anniversary of the Royal club, the team sits comfortably on the top spot with a lead of eight points over the second-placed Sevilla.

Carlo Ancelotti took over the squad after Zinedine Zidane’s departure and wasn’t expected to perform as well as he did with the squad given to him. The transformation of a few and the downfall of others have been spotted under his reign.

All had been looking good for the Los Blancos this season, so far, under Carlo Ancelotti’s reign. The boss had been showered with praise for handling the squad well in the first half of the season, but later as the lack or the absenteeism of rotation came to light, players became visibly tired, playing the matches in and out.

The boss doesn’t like changes. And, it’s the single thing that’s concerning the fans and possibly the players, as well. He follows the chef’s original recipe and doesn’t even like to change the salt according to his preferences.

However, it doesn’t seem surprising, as the first tenure of Ancelloti raised a similar question. And it’s a sight of utter disbelief when we compare the rotation of the Ancelotti to that of Zidane’s, under who managerial ship the one guessing the line-up before the match would be called as Zidane himself.

The lack of rest for the senior players has resulted in the lack of game time for the youngsters such as Camavinga, Fede Valverde, Blanco. This lack can result in not only short-term loss but may lower the morale of the budding ballers, and result in us losing them.

Even though the boss claims that rotation is not an issue and doesn’t see it as a problem because he claims that the same squad has only started twice so far. But an issue that lies here is the entire predictability of the line-up ahead of the game and then late or no substitutions, highlighting the double lack of rotation in a single game. This double lack highlights the problem of lack of experimentation, even in comfortable situations.

Ancelloti knows it is a gamble to play his main players regularly. A tired squad will only be underperforming in heavy games if they overperform in light games. Or even worse, underperform in light games as we saw against Cadiz at home this season or against Osasuna, again at home. The fans are convinced that the changes will only be made when they are forced, either by suspension or an injury.

As quoted by Managing Madrid, Carlo in his defence of not rotating the front two of Benzema and Vini, said, “We have replacements, but the two attackers in front are doing a very good job, and it’s hard to give them rest because it would stop our momentum. The thing about Casemiro is that he brings so much balance, we have other great players behind him like Camavinga or Blanco, but they don’t have a lot of experience yet.”

It’s understandable to play your top-performing players, but the underdevelopment of the young players may hit harder when they’d be required to perform in the absence of the injured or suspended senior midfield.

Another sight that’s saddening to many Madridistas is seeing Eden Hazard and Gareth Bale benched throughout the game and not even being given the chance to sub in a comfortable winning position.

A name that’s often left out of the discussion and squad rotation is that of Eder Militao, who’s been on the field for 2340 minutes, just 90 less than Thibaut. The Brazilian has been on national duties as well and yet continues to be a part of the line-up on all but a single game.

The engines of Vinicius, Benzema, Kroos, Mendy, Alaba, Casemiro, and Modric, too, are bound to run out of fuel. And it is only a matter of time before we’ll see that. It can be against PSG in the second leg or could come in the final matches of the league. It’s time the young horses are trained, put on the field, played alongside the experienced legends, and made ready for tomorrow.