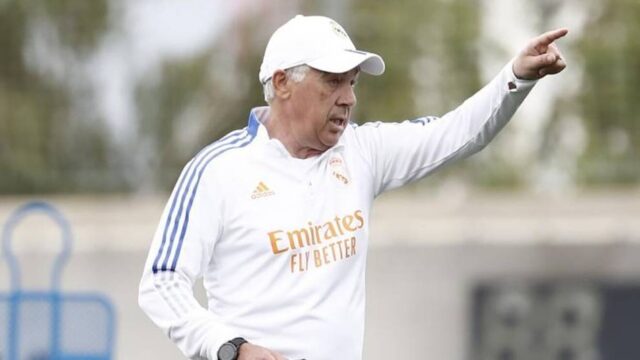 Real Madrid manager, Carlo Ancelotti has revealed he has been impressed with the team’s performance so far during the pre-season training.

The Italian talked to the club’s official TV channel, where he discussed some vital issues including the squad’s preparation for the new season.

“I’ve really enjoyed finding those two things: the quality among the youngsters, many of whom I didn’t know very well, and, above all, the hunger and commitment from the likes of Carvajal, Nacho, Marcelo, Lucas Vázquez and Isco, who’ve won it all in recent years and still have great desire, excitement and hunger to have a good season, which is what we’re all looking to do,” the former Everton boss said.

On the style of football he will want his team to play, he added: “We have to take the club’s history into account. As a team, we have to play well and show the quality we’ve got out on the pitch. We also have to play a high-energy, high-intensity game, both with and without the ball, which is what the modern game requires of you: high intensity both on and off the ball.”

Ancelotti also shared his opinion about Madrid’s newest signing David Alaba and stressed on his delight at having the versatile player at his disposal.

“He’s a strong all-round player with a lot of quality. He’s also very smart in terms of defensive tactics. I played him at centre-back in my last few games at Bayern and he did very well. He played at left wing-back and has a lot of experience and is very smart. He’s capable of playing in both positions and has even played in central midfield for Austria. He’s a strong all-round player who I’m sure will have a really good season,” concluded the coach.