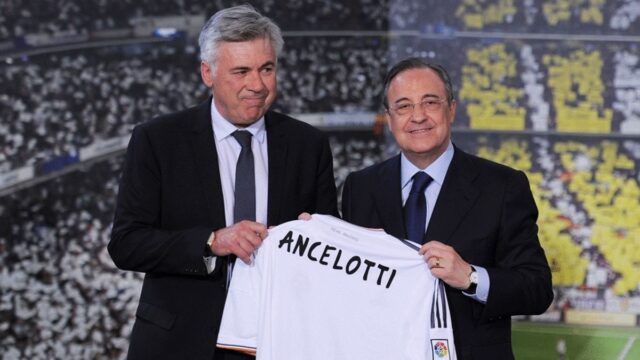 There is a new name which has been mentioned as the favourites to take the current managerial job at Real Madrid for next season, that name, Carlo Ancelotti.

Ancelotti has become the latest person to be mentioned after Massimiliano Allegri, Mauricio Pochettino, Antonio Conte, Christophe Galtier and Raul Gonzalez to fill in the vacant job left by Zinedine Zidane at the Santiago Bernabeu.

For many Madridistas, Ancelotti is a fans favourite and holds a special place in the heart of the fans following his heroics in leading the club to achieve the ‘La Decima’ in 2014.

The Italian coach was given the managerial job at Real Madrid during the summer of 2013 after leaving Paris Saint-Germain. He managed the club for two years and delivered what the club had always wanted, the joy of winning the UEFA Champions League again.

His return has not been ruled out although he currently leads the charge at Premier League side Everton. The manager already disclosed some years ago that he would not turn down the opportunity to train the Los Blancos if he was called by Florentino Perez.

According to the Spanish press, Madrid is acting swiftly to bring in Ancelotti to lead the team once again while others believe the club could even go on to announce his acquisition as early as today.

Under the tutelage of Carlo Ancelotti, the Los Blancos boasted one of the most potent trios in world football with Gareth Bale, Karim Benzema and Cristiano Ronaldo. Out of 119 games managed in two years at Real, Ancelotti won 89, drew 14 and lost the remaining 16.

What is your take on the rumoured imminent return of ‘Don Carlo’ to the Santiago Bernabeu?