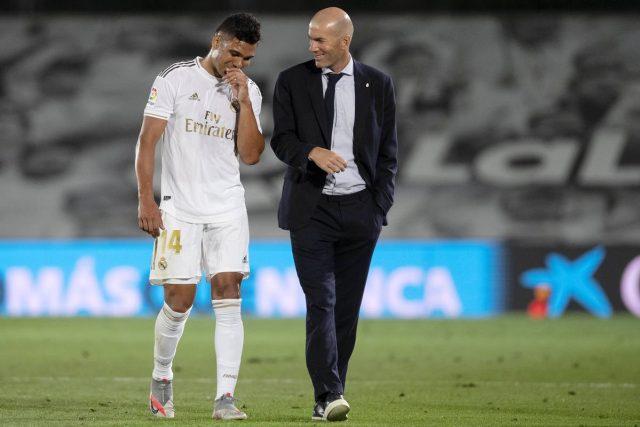 Real Madrid midfielder Casemiro has heaped praises on his manager Zinedine Zidane for the work he’s done at the helm of affairs at the club.

Zidane is taking care of Madrid for the second spell after a first fruitful time between 2016 and 2018.

He has won two Spanish League trophies and three consecutive Champions League titles in both spells and the Brazil international believes Zidane will go down as one of the best coaches of this generation.

“It’s very easy to talk about Zidane,” Casemiro told UEFA’s official media. “As a player, he was always my idol, because he played in midfield.

“His qualities are different to mine, but I appreciate his style. And as a coach we don’t realise what Zidane has really done and what he is doing for the good of Real Madrid.

“Very few coaches have been able to achieve what he has so far, especially his achievements in the Champions League.

“His achievements as a player and as a coach will be remembered in 20 or 30 years because what he is doing now will stand the test of time.

“This will be brought up when the history of Real Madrid is spoken about.”

Madrid are set to face Inter Milan on Wednesday night in a fixture that could play a part in their quest to qualify to the next round of the competition. And Casemiro has revealed the main objective of his side is to top the group.

“We knew it wasn’t going to be an easy game, but mentally we were very strong and focused on winning and Rodrygo sealed it with a goal,” Casemiro added. “The mental effort and the focus that we had throughout the game was very important.

“We’ve already put in a great performance against Inter, so we can only improve in this competition. We know that it’s a difficult group.

“Inter are a great team, with a strong tradition and a coach who is has a very clear vision of the game.”

The midfielder also stressed on the fact that the Champions League gives the Madrid dressing room a whole different feeling and emphasised that the club always want to win it.

“[The Champions League] is special,” Casemiro noted. “The week before a match is completely different at this club.

“Every match is important, but before a Champions League match the atmosphere changes.

“It’s no surprise that Real Madrid have won so many trophies. We all live and breathe the Champions League here and we all live to win it.”