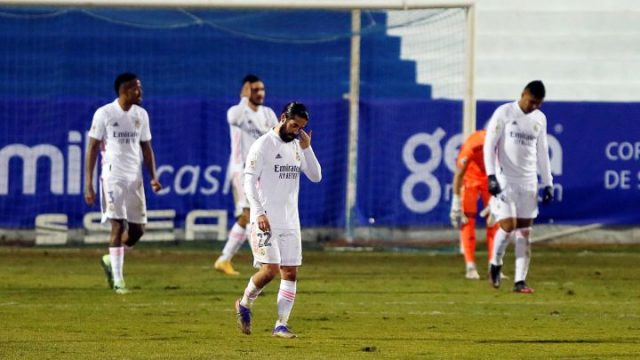 Real Madrid was handed a surprising defeat to Segunda B side CD Alcoyano on Wednesday night in the 2020/21 Copa del Rey competition.

The home team despite going a man down in the extra time did very well to knock the current La Liga champions out of the cup with a 2-1 scoreline.

Madrid took the lead on the 45th-minute mark through center-back Eder Militao, who headed home Marcelo’s cross into the 18-yard box of the opposition.

Alcoyano after the recess made changes to their team, effecting all five of their substitutions between 15-25 minutes after restarting the second-half.

Their change paid off shortly, with Jose Solbes drawing them back into the game when he struck the ball past Andriy Lunin into Madrid’s net, making it one apiece.

Zinedine Zidane went into the extra minutes hoping to use some of his first-team players to his advantage but those plans backfired, as Vicente Parras’ side put themselves into the lead, shortly after Ramon Lopez had been sent off.

The results now mean that the Copa del Rey trophy eludes Zidane once again having failed to win it in his previous years as manager of the club.

This also means that the Los Blancos are now on a three-game winless streak across all competitions, with their last victory dating back to January 2, against Celta Vigo.

They will now turn their attention to the league game against Deportivo Alaves away from home on Saturday night, where they could look for redemption.