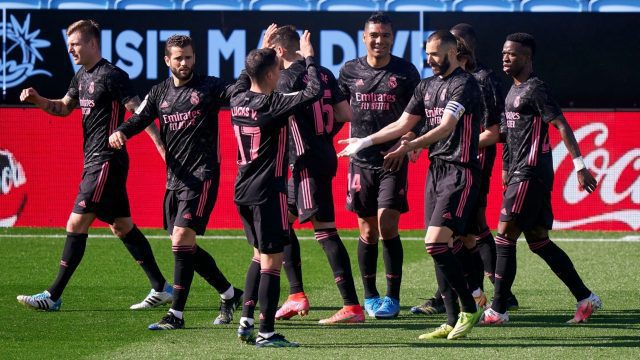 Karim Benzema continued his incredible goalscoring form on Saturday as Real Madrid beat Celta Vigo by three goals to one.

The Frenchman scored twice and set up another as his side walked away with all three points away from the Alfredo Di Stefano Stadium.

Madrid were the better side for the majority of the opening half, creating chances and making sure they took command of the game.

Benzema opened the scoring after just 20 minutes played, slotting home from a Toni Kroos assist to break the deadlock. He was on the scoresheet once again 10 minutes later, assisted by the Germany international to double Madrid’s lead.

Santi Mina pulled one back for the home side before the first-half break, needing an assist from Dennis Suarez.

Celta grew into the game after the recess and had so many opportunities to get back on level terms, but Zinedine Zidane’s side had it all covered at the back with Thibaut Courtois, Nacho Fernandez and Casemiro all making important saves to deny Celta a second goal.

Marco Asensio came off from the bench to seal the win for the away side in injury time to give Madrid all three points.

Real Madrid head into the international break in a blistering form and would hope to come back with same momentum.