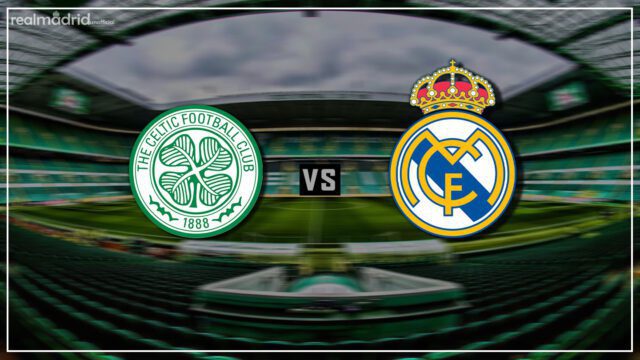 Obviously, not a top pick for the match of the week but can’t also be neglected for one of the games to keep an eye on – It’s the UEFA Champions League and it’s Celtic vs Real Madrid in Group F.

Madrid’s title defence starts in Scotland and it comes against an old-time friend in Celtic.

The two teams’ last meeting came during the quarterfinal of the 1979/80 European Cup season, where Los Blancos advanced to the next stage with a 3-2 aggregate score.

In the first seven games of the 2022–23 season, Celtic has won every game, while Real Madrid has won its first five games, including four in La Liga.

Celtic’s 4-0 hammering of arch-rivals Rangers on Saturday in the Scottish Premiership helped the Hoops go five points ahead of the Gers at the top of the standings, which was a perfect warm-up for this game.

Madrid on the other hand had to end the perfect start to the season for Real Betis as they recorded a 2-1 victory in their first game at the Santiago Bernabeu this season.

Prior to the commencement of the international break, Madrid has four more games left to play: against Osasuna at the beginning of October. They will then play Mallorca and Atletico Madrid before playing Celtic and Leipzig in the Champions League.

Embed from Getty ImagesKyogo Furuhashi left the game against Rangers early due to a shoulder injury, and the striker is now a big question mark for this match.

Moritz Jenz and Georgios Giakoumakis may replace Carl Starfelt as the latter is a doubt for this game due to a knee injury he sustained in the previous game.

Yosuke Ideguchi is still sidelined with a leg injury, but new addition Oliver Abildgaard, who joined on loan from Rubin Kazan, is trying to play. Three of Celtic’s four goals against Rangers came from Jota and Liel Abada, who will undoubtedly start in the final third of the field against the European champions.

For Madrid, Federico Valverde and Toni Kroos are likely to start as Ancelotti is predicted to make a few adjustments to the lineup from the team that entered the field for kickoff on Saturday.

Rodrygo and Eduardo Camavinga might be the two players to withdraw, but Antonio Rudiger might have to settle for a bench berth once more with the back four in Scotland being Dani Carvajal, Eder Militao, David Alaba, and Ferland Mendy.

With six goals already this season, Liel Abada is a threat to defences. The Israeli has built a good understanding with Jota and Kyogo Furuhashi but with the latter missing, the 20-year-old is likely to be the main threat from Celtic’s point of view.

He scored a brace during the Hoop’s 4-0 drubbing of Rangers over the weekend.

It was Karim Benzema who grabbed the headlines almost all the time during the 2021/22 campaign, and though that limelight is still present, Vinicius Jr’s start to this season makes his the player to watch out for when Madrid face Celtic on Tuesday.

His ability to dance through defences and turn simple balls into attack has made him one of the hottest players in Europe at the moment. He could be the source of Celtic’s headache in Glasgow.