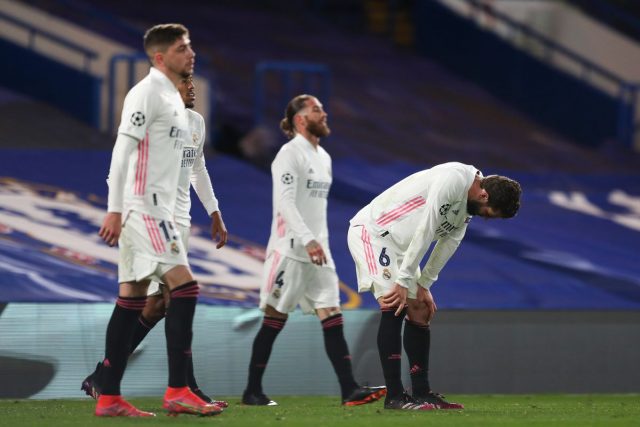 Real Madrid’s run to win the UEFA Champions League for the 14th time was halted when they faced Chelsea at Stamford Bridge on Wednesday night.

Having earned a 1-1 draw at the Alfredo Di Stefano Stadium, Madrid were looking to complete the mission in England but was rather put to the sword, losing by two goals to nil.

Timo Werner and Mason Mount scored in the semi-final second leg as Chelsea were victors of the tie with a 3-1 aggregate scoreline.

Zinedine Zidane opted to start with Sergio Ramos, Ferland Mendy, and Eden Hazard in the return leg after their recovery from injury.

However, that decision backfired and Madrid’s best game during the first half where they were able to create chances and get shots on target only to be denied by the impressive Edouard Mendy.

The Senegal international pushed out of play a Karim Benzema curling effort before tipping over the crossbar a header from the Frenchman.

Chelsea broke the deadlock in the 29th minute of the game when Werner headed in from close range after Kai Havertz had struck the bar – the Blues going into the break with the lead.

With two minutes away from full time, an interception from N’Golo Kante saw Thomas Tuchel’s side surge on a counter-attack with substitute Christian Pulisic assisting Mason Mount to put them to bed.

The loss means Madrid have now failed to reach the finals of the competition in the last three years while Chelsea set up an all-English final against Manchester City.