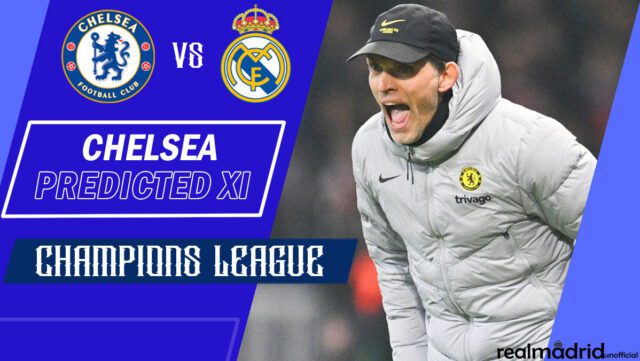 UEFA Champions League action returns this week with entertaining and competitive football. Eight teams are left in the competition that are seeking to advance to the next stage of the competition. Chelsea will be hosting Real Madrid in one of the four quarterfinal fixtures.

The two sides met last season in the semi-final stage with the Blues beating Madrid to a spot in the final, which they eventually won. The defending champions Chelsea have never lost to the Spanish giants. A record Chelsea holds and will build upon it once again to help eliminate Madrid once again.

Chelsea have managed six wins out of eight games they have played in the competition so far. They have lost and drawn a game respectively. The Blues have scored 17 goals and conceded only 5 goals.

Real Madrid on the other hand have won six of their eight games and have lost twice, scoring 17 and conceding five goals.

Here, we will take a look at how the London club can lineup against the Madrid side.

Thomas Tuchel has always paraded a side which is difficult to break, resulting in conceding fewer goals. It is very likely that the German gaffer would go into the game with a three-back system. The formation could either be a 3-5-2, 3-4-3 or 3-4-1-2 system.

Mendy is expected to keep the post safe in this encounter. The Senegalese is currently amongst the top three goalkeepers in the world. It wouldn’t be ideal for Tuchel to leave him out of action.

Mendy is a very good goalkeeper with a commanding spirit, organizes his backline and communicates with them well and has a better aerial ability. He has kept 5 clean sheets out of 7 matches in the competition, making 5 saves. He contributes to ball distribution as well. His passing accuracy is 83.86%.

Rudiger and Silva have been the most reliable centre back Chelsea have depended on this season. The pair have formed a solid partnership for over a year now and have featured in most of the important matches for the club. Silva is very experienced and can boast of his ball distribution abilities that break opponents’ lines. A very good ball-playing centre back with a passing accuracy of 92.43%. A total of 7 tackles has been made by the Brazilian and has recovered 48 balls. He alongside Rudiger who has made 5 tackles and recovered 37 balls would be a key figure for the club.

However, the absence of Trevoh Chalobah who has been excellent could grant the club’s skipper Azpilicueta the chance to accompany Rudiger and Silva at the heart of the defence for Chelsea.

In big games like this, Kante and Kovacic certainly are options that mostly start for Chelsea. Kante over the years has shown how important he is to Chelsea in big games like this. Last year’s clash against Madrid saw him winning the man of the match award. Due to an injury earlier this season, he has only featured in 4 matches in the Champions League. He has one assist to his name with a passing accuracy of 91%, recovering 19 balls and making 1 block. His presence will be key in the midfield for Chelsea.

Kovacic is also in contention to start for Chelsea after he was handed a rest against Brentford City last weekend. He’s that type of midfielder that drives the ball forward a lot.

James and Alonso are the best possible options to fill the full-back position. Reece James is that type of player who bumps forward a lot aside from his defensive traits and can help Chelsea to create goal-scoring opportunities. He has scored a goal in the four matches he has played in the competition so far.

In a situation where Tuchel would like to have more superiority in the midfield, a third Central Midfield can be introduced. Jorginho could play alongside Kante and Kovacic, resulting in benching one forward.

Mount and Havertz in recent weeks have established themselves as guaranteed starters in the attacking options of Chelsea. The pair have contributed to three goals out of the 17 goals Chelsea have scored. They understand each other very well and their inter-positional play and link-up is top-notch.

Christian Pulisic sees to be a better option to start alongside Mount and Harvetz. He has the most goals contribution amongst Chelsea’s attackers in the Champions League. He has scored 3 goals and has 1 assist.

Should Tuchel decide to play with a striker, Lukaku is the best option to play in the role.