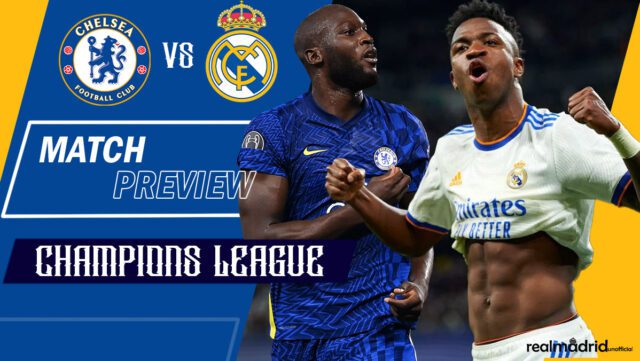 Real Madrid will come up against Chelsea in the first leg of the UEFA Champions League quarterfinal tie. The game will take place at Stamford Bridge.

Madrid’s run to the last eight of the competition was an enviable one following their epic comeback victory over Paris Saint-German at the Santiago Bernabeu.

A Karim Benzema hat-trick was enough for the Los Blancos as they overcame the Ligue 1 side, whose goals came through Kylian Mbappe.

With a fixture Madrid have wanted for a long, the game against Chelsea presents a great opportunity to revenge for last season’s exit in the semi-final.

After a 1-1 draw at the Alfredo di Stefano Stadium in the first leg last season, the Blues scored two unanswered goals past Thibaut Courtois in goal for Madrid to eliminate the Los Blancos.

That was the closest Madrid has come to winning the competition since they last won it in 2018.

This year, Madrid are looking to make their chances count when they travel to London first. Under a manager who has been in the dugout before at Stamford Bridge, the Spanish side do have an opportunity should Carlo Ancelotti recover in time from the coronavirus.

The manager missed Madrid’s last game against Celta Vigo but is in line to be present against Chelsea.

Chelsea have been attacking in the majority of their games through their wingback. Reece James and Marcos Alonso have been key to the Blues’ dominance in the final third of their opponents.

For Madrid to be able to topple their opposition, the midfield and wingers will be crucial in executing this plan. Vinicius Junior, Rodrygo, Marco Asensio or Federico Valverde – any of these players who get to play will make sure they limit the movements of James or Alonso.

Chelsea lost their last league game over the weekend, with Brentford thumping Thomas Tuchel’s side with a 4-1 scoreline away from home.

Madrid can approach the game as the Bees did, limiting the fullbacks to little or no chance creation and making sure they take their chances when they’re presented with one.