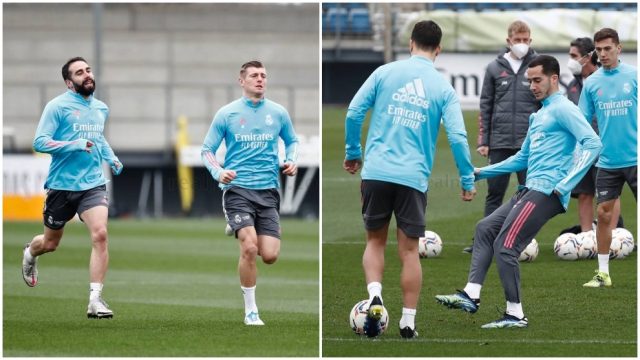 Real Madrid are set to receive some huge boost in both their defensive and offensive departments with the return of Dani Carvajal and Lucas Vazquez respectively.

The pair have barely been involved in the second half of the season, with injuries playing a part in their lengthy absence on the sidelines.

Carvajal had missed the last seven games across all competitions for Zinedine Zidane’s team with his last appearance coming in the 2-0 win over Celta Vigo in the Spanish La Liga.

Vazquez on the other hand has been on the sidelines for the last three matches that the team has played, with the right-back position sometimes being left to suffer.

However, the pair returned to training this week, doing individual sessions before being able to train with the team.

The availability will now provide depth for the right flanks considering the fact that Alvaro Odriozola has also added to the injury woes of the squad.

Whether or not Zidane will choose to start both players is another topic for discussion with the UEFA Champions League game against Atalanta also just around the corner.

The main objective now will be to get both players to be match fit and gain some minutes before planning for the Champions League game against the Italian outfit.