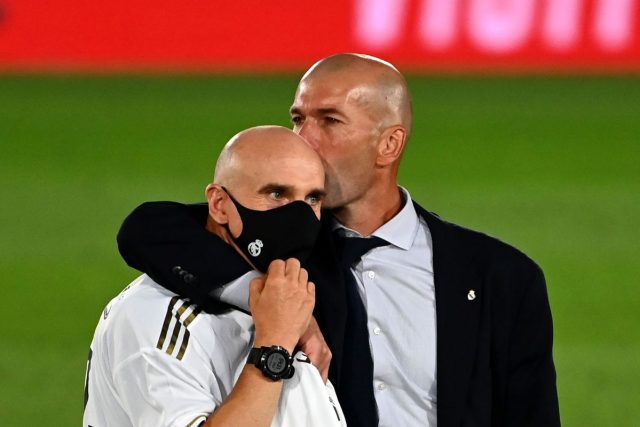 David Bettoni was given the honor of leading the Real Madrid team, following Zinedine Zidane’s absence as a result of testing positive for the coronavirus.

Bettoni recorded a win on Saturday night as Madrid scored four goals past Deportivo Alaves away from home in the Spanish La Liga.

Zidane’s assistant spoke to the media after the well-deserved victory and insisted that he felt the victory was just the right reward for their efforts.

He said: “It was a deserved win and we played well from the start. We were very serious defensively. We knew Alavés can play well in transition and that they can counter-attack well. So, the team did well. Now, we’ll rest for a couple of days and then prepare for the next match against Levante.”

At some point in the game, David Bettoni was pictured with his phone and was questioned on the messages he received from the boss, who was isolating at home. He added: “For the substitutions, I wanted to know the boss’ thoughts because he’s obviously the man in charge and, let’s say, the most important person. He was very happy with the attitude and play. He told me to congratulate the players like he would have done. Nothing special. We’re happy with the three points.”

The temporary head coach was also asked about the performance of Eden Hazard, who netted his second league goal of the campaign, and why he decided to sub him off for Vinicius Junior. His reply was: “We wanted to put in Vinícius for a bit more verticality. Hazard was good, but we wanted some more verticality and freshness. That’s all. He’s had a tough year and a half with injuries. We need to have patience with him. Of course, that’s tough at Real Madrid, but we’re happy with him. I think he’ll get better with each match.”