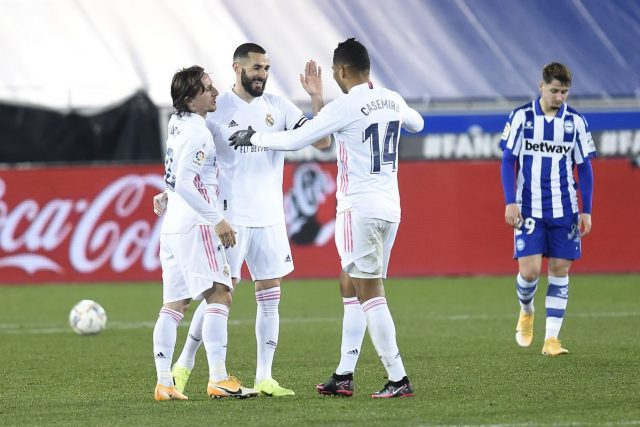 Real Madrid put on a good show on Saturday after a series of bad performances in their last three games across all competitions.

Goals from Casemiro, Eden Hazard as well as a Karim Benzema double saw the Los Blancos put four goals past Deportivo Alaves, who only had an answer to one.

Madrid was on a three-game winless streak across all competitions, having last won a game in the league, during the 2-0 win over Celta Vigo earlier this month.

Casemiro opened the scoring for Madrid in the 15th minute, meeting Toni Kroos’s superb delivery from a corner into the right post of the Alaves goal. The goal was the Brazil international’s fourth league goal this campaign, equaling last season’s tally and now a goal-shy from his personal best in the top flight.

Benzema doubled Madrid’s lead on the 41st-minute mark. The captain of the day finished off cooly after a brilliant flick from Hazard to grab his first goal on the night.

The Belgium international was on the receiving end minutes later, controlling a beautifully lofted pass from Kroos before slotting it past Fernando Pacheco to increase his side’s dominance.

In the absence of Zinedine Zidane, who had tested positive for coronavirus, the team was coached by David Bettoni on the night. He went into the half-time break as a delighted man having seen his team taken a three-goal advantage into the recess.

Alaves returned from the break with an improved mentality and were rewarded for their charging. Joselu pulled one goal back for the home team but that was all they could manage throughout the 90 minutes.

However, Benzema made sure the Los Blancos finished the game with their three-goal lead, curling the ball into the right corner of Pacheco’s post in the 70th minute.

Madrid will be hoping this wins turns around their fortunes as they bid to defend the title they won last season. They are now four points behind leaders Atlético Madrid, who have played two games less.