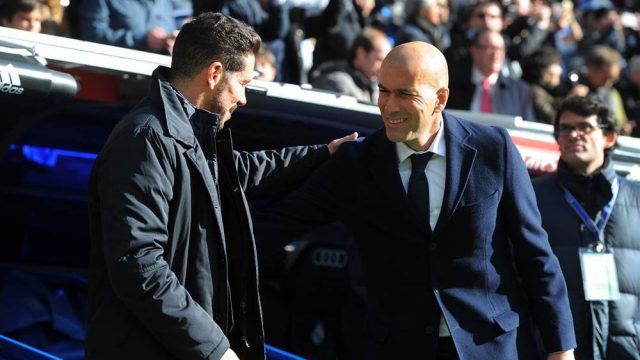 Atletico Madrid are set to host Real Madrid in the Madrid derby on Sunday as the battle for the La Liga title continues to take an interesting turn.

While the performances on the pitch have dominated the headlines in the past seasons, one thing not talked about enough is the tactics that have come from coaches of either side.

Since assuming respective managerial positions at their clubs, Diego Simeone and Zinedine Zidane have faced each other on 12 occasions, while they also had the chance to battle it out during their playing days – just once as players in the derby, a game Zidane had the upper hand over the Argentine.

RIVALRY IN THE DUGOUT

In their previous 12 meetings, the Real Madrid manager has the advantage with regards to wins recorded as compared to his counterpart.

Zidane has six wins while Simeone has recorded just two wins over the Frenchman with the other four ending in draw.

In his first derby game, Zidane lost to Simeone at the Santiago Bernabeu during the 2015/16 campaign, that same season also saw Zidane win his first silverware as the manager of the club, beating Atletico Madrid in the final of the UEFA Champions League in Milan.

Several wins have followed since that time but just one has been for Atletico while all their four draws have been in the Spanish top-flight.

Simeone at some point in the 2020/21 season looked like running away with the league title with his newly developed formation. The Argentine has resorted to a 3-1-4-2 formation for the majority of this season, allowing his full-backs to operate with full freedom.

While they are on the attack, Atletico have six players in the final third which has been the reason for their goals coming from quite a number of players but their defending as a unit is much better, managing just 0.7 goals conceded per game – the least in the league this season.

On the other hand, Zidane has always kept trust in his traditional 4-3-3 plan, with the midfield trio of Luka Modric, Casemiro and Toni Kroos bossing their department. Injuries have contributed a lot to their inconsistent performances this season but the Los Blancos are on course to keep fighting to defend their league title.

For both coaches, it will be a matter of getting the better of each other when they play on Sunday but it will all boil down to the tactical decisions and the substitutions that could affect the game should the need be.