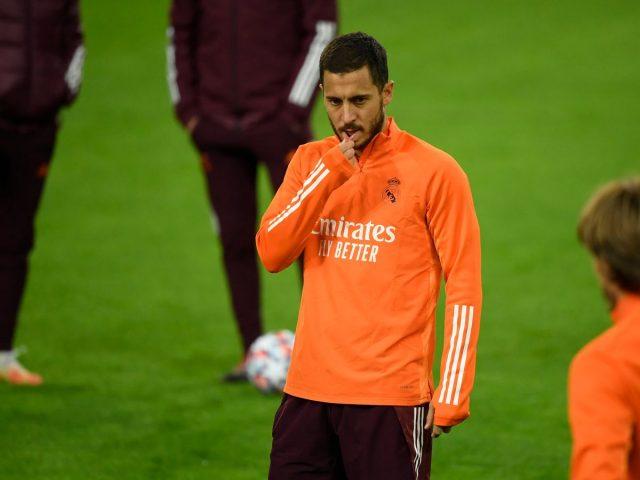 Following Real Madrid’s late 2-2 draw with Borussia Mönchengladbach on Tuesday, Eden Hazard was reportedly said to have issued a message to the club’s medical team.

The player who made his first outing for the club in the 2020/21 campaign during the game was delighted with his fitness and is said to be keen to get onto the action.

Hazard played just 15 games for the Los Blancos last season as they ended the campaign winning the Spanish League title.

His absence has been large due to ankle injury he’s been suffering from after he was kicked by countryman Thomas Meunier during Madrid’s clash with the French outfit in the Champions League group stage last season.

That ankle injury coupled with muscle injuries has delayed his debut this campaign, with his first appearance finally coming in midweek against the German side.

According to reports from El Mundo Deportivo, the Belgium international had a word with Madrid head of the medical department Niko Mihic after the game.

This feedback per the same publication is believed to have been heard by some of the medical team as well as the players, who are very eager to see the 30-year-old return to his best form for the club.

Hazard is line for another competitive appearance on Saturday when Real Madrid face Huesca at the Alfredo Di Stefano Stadium before Inter Milan visit the same stadium next Tuesday for the third group game of the Champions League.

Zinedine Zidane will be hoping at least the player finally overcomes his setbacks which has seen him suffer criticism for most part of his time in Spain and that he becomes crucial for the club in the remainder of the season.