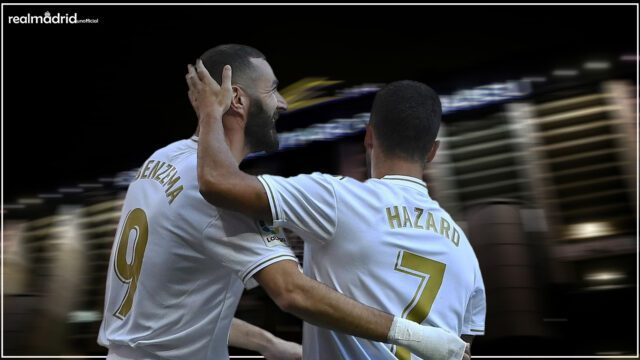 It’s just seven games into the 2022/23 season but Real Madrid are already without a vital man in their team following Karim Benzema’s withdrawal in Glasgow.

Benzema played just 30 minutes of the game against Celtic in Madrid’s opening game of the UEFA Champions League and had to be replaced by Eden Hazard.

Prior to replacing the Frenchman in Glasgow, Hazard featured in just two out of five official games in the new season, coming on as a substitute against UD Almeria and Celta Vigo.

Though it took a while for both Hazard and Madrid to settle against Glasgow, it was about Ancelotti’s side after they had opened the scoring.

The Belgium international was heavily involved in the first goal as he had an exchange with Federico Valverde before the latter went on a run and then sent in a low cross which was finished off neatly by Vinicius Junior.

Hazard was also in the mix for Luka Modric’s goal to double Madrid’s lead. He took the ball from the centre line and dribbled past two players before passing the ball to the Croatian to hit a trademark strike to make it 2-0.

Then, the substitute grabbed the icing on the cake after a beautiful second-half performance. The Belgian shielded a Celtic defender to allow Dani Carval receive a crossfield pass from Toni Kroos.

The right-back returned that favour to Hazard as he squared the ball for him to score his first goal of the season.

But the question remains, can Eden Hazard fill in the void for Benzema?

A false 9 role may not be new to Hazard as he was used to a similar thing during his time at Chelsea.

However, at Madrid, Benzema’s importance and his high goal-scoring attributes mean the Belgian will be under the light any time he fails to deliver.

Against Mallorca over the weekend, Hazard has to be withdrawn early as he was struggling to exercise his authority in the game, with his removal going on to see Madrid win the game.

It might be the case that Hazard will flourish in some games for Madrid playing as the substitute for the injured Benzema but to say he can fill in the shoes of the Frenchman is far from completion.

Eden Hazard is more suited to the left wing than any other position on the pitch and that means leaving Vini Jr. our of the starting line-up; an idea that is far from being considered by Carlo Ancelotti.

Benzema is expected to miss the next three games including the encounter against Atletico Madrid in the league.

Hopefully, Hazard can step up or play enough to give Ancelotti a selection headache.