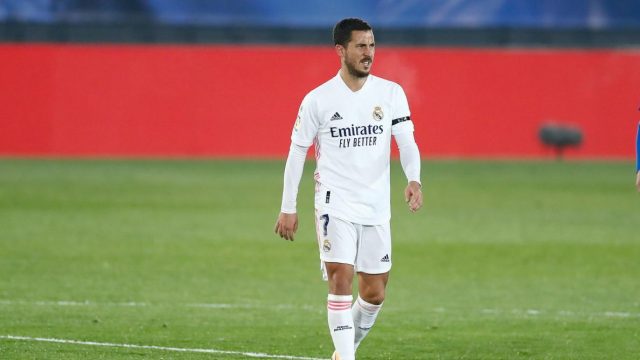 Real Madrid’s injury list keeps piling up with Eden Hazard the latest to be added to the treatment room.

Hazard has been unlucky with injuries since signing for Madrid in the 2019 summer transfer window.

The Belgium international was unable to train with the squad on Tuesday but was involved in the earlier sessions on Wednesday morning before having to do tests over complaints about discomforts.

A report on Real Madrid club’s official website read, “Following tests carried out today on our player, Eden Hazard, by Real Madrid Medical Services, he has been diagnosed with a muscle injury in the rectus femoris of his left leg. His recovery will continue to be assessed.”

Eden Hazard is expected to be out of action for the next four to six weeks, making him a huge doubt for the UEFA Champions League game against Atalanta later this month.

Since arriving in Spain, the former Chelsea winger has suffered nine injuries, making him available for 35 out of 79 games within that period.

Hazard’s injury also means that Marco Asensio and Vinicius Junior are the only natural wingers available for the game over the weekend, knowing that Lucas Vazquez and Rodrygo Goes are also nursing respective injuries.