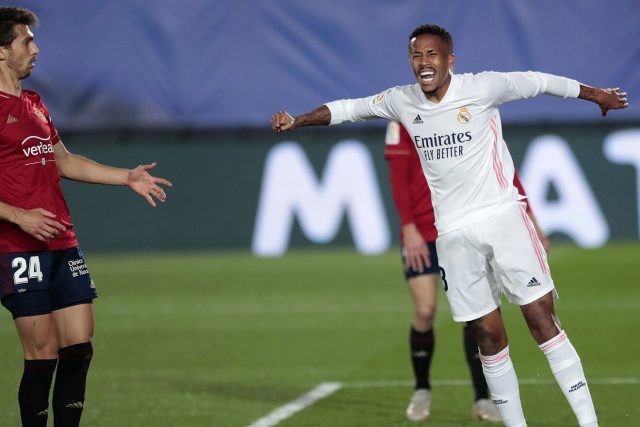 After struggling to make an impression during his first season at the Santiago Bernabeu during the 2019/20 season, Eder Militao could finally be winning back the hearts of many.

Arrived at Real Madrid in the summer of 2019 for €50 million from Porto, fans of Madrid were expecting the Brazil international to be ready anytime he is called upon, but that was never the case after a series of poor performances due to lack of confidence.

In his maiden campaign in the Spanish top flight, the 23-year-old managed just 10 starts all season and was at the receiving end of criticism when Madrid were knocked out of the UEFA Champions League by Manchester City.

Injuries in the latter part of the season has seen Militao become a better version of himself, he has started in all of Madrid’s last nine games across all competitions, with the last game seeing him score his first goal this season.

He also provided the assist for Karim Benzema for the crucial equaliser in the 1-1 draw against Chelsea in the Champions League last week.

Once tagged as a flop with media outlets reporting that the club could be moving him on, Militao has turned his situation around and is now considered untransferable considering the uncertainty around the futures of Raphael Varane and Sergio Ramos.

The Brazilian has come up against teams like Liverpool, Barcelona and Chelsea and has displayed maturity during the course of these games.

His confidence level has grown in these last few matches and that has been largely due to the consistent game time he is being given.

He has contributed to five clean sheets in his last six games across all competitions and looks set to be in the starting lineup for the return leg of the Champions League semi-final tie against Thomas Tuchel’s side on Wednesday.

Unfortunately for him, his performance have come in the absence of the supporters at the stadium but there is still huge optimism that he could get better with regular minutes under his belt.

Together with Nacho Fernandez, they have kept a good defensive line and helped Thibaut Courtois as much as they can in the last games they have played together.

It will be interesting to see how far his defensive prowess can take him to but at the moment, he seems to be in ‘the form of his Madrid career.’