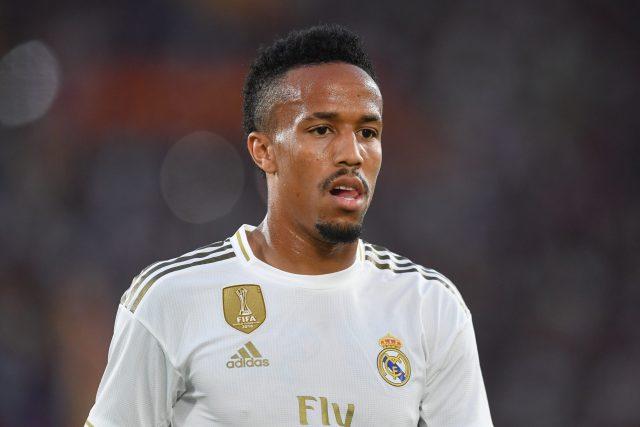 Real Madrid defender Eder Militao has claimed he is ready to step up and fill the gap for captain Sergio Ramos when they team travel to England to play Manchester City.

The captain is suspended after picking up a red card in the first-leg encounter at the Santiago Bernabeu which Los Blancos lost with a 1-2 scoreline.

Militao has not had many chances but he was definitely aware he was not going to get too many opportunities in his maiden season considering the strong partnership between Ramos and Raphael Varane.

And he will be given perhaps a chance in what could be his biggest game in the Madrid shirt so far when they play Pep Guardiola’s side.

Speaking to AS, the Brazil international said: “It’s an amazing feeling, a unique chance for me to give it all. Ramos will not be there and I have to put my heart and soul out there. It’s my big chance to prove that I can be trusted in tough games. I am getting ready and I try to give my teammates confidence. I hope it can be an unbelievable game.

“I’ve improved my preparation for each game. My focus and concentration is even bigger ahead of the big games. I get ready psychologically and each training session is different, we try to preview things that could happen in Manchester.”

The centre-back is yet to find the back of the net for Zinedine Zidane’s side despite scoring a few for Porto before his move but has said he is hopeful of opening his account against the Citizens.

“I imagine my first goal now, in Manchester. The winning goal, a header. I wouldn’t know how to celebrate it, to be honest. Everything is possible and I will go after it,” added Militao.

The versatile player also talked about his relationship with coach, who wasn’t at the club yet when Real Madrid completed the signing of Militao.

“We get along very well. When I’m going to play he always talks to me the day before and also the day of the game. He wants me to be focused so that I can play well,” said Militao.

Then, he was asked whether it surprised him seeing how close to his players Zidane is. “No, I expected it,” he added.

Militao concluded the interview sending a message to the fans, saying: “Real Madrid fans, we won’t have our captain against Manchester City but I will be there. I will play a good game, trust me. We will come out victorious.”