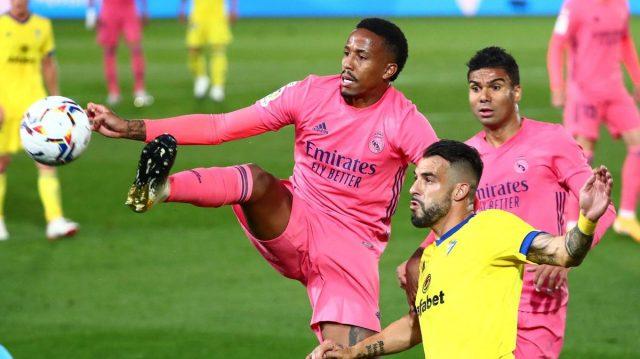 Real Madrid defender Eder Militao is the notable absentee from Zinedine Zidane’s side to face Inter Milan on Tuesday.

The Brazil international was the subject of a positive result from a coronavirus test taken at the club’s training grounds and is expected to miss the crucial Champions League game against the Italian outfit.

However, Lucas Vazquez, who picked up a knocked and was substituted in the 52nd minute over the weekend against SD Huesca in the Spanish La Liga has been named among the squad for game.

Madrid are already suffering a right-back crisis with Daniel Carvajal and Alvaro Odriozola all out injured, while makeshift Nacho Fernandez is also sidelined.

Vazquez recovery could be timely for the manager and the player is expected to be restored into the starting lineup straight away.

Here are the names of the full squad called up by the Frenchman for the Champions League tie on Tuesday: