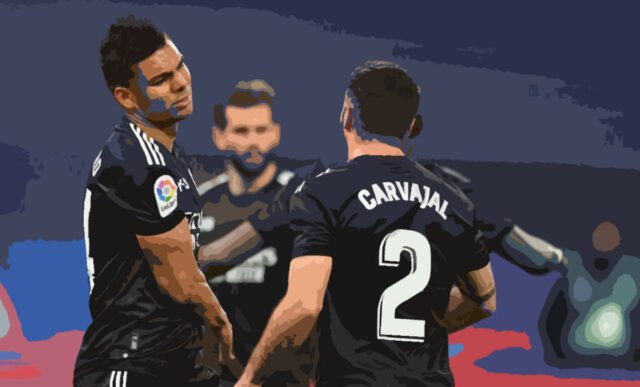 The El Clasico happened at Santiago Bernabeu, and Real Madrid dropped one of its most disappointing and worst performances of this season, which too came against the eternal rivals and the Catalan representatives, Barcelona.

A display of such sub-standards could’ve let go, just like we all let got the one against Sheriff in the UCL at home. But to perform this horrendously in a game as big as Clasico is inexcusable. Firstly, the magnitude of the defeat was huge, 0-4, that too on the home ground.

And secondly, players and the manager both looked clueless throughout the 90 minutes, with only Thibaut Courtois saving the team from what could’ve been a 0-6 or 0-7 scoreline.

And who is to blame for all that happened against Barca in the second Clasico of the 2021-22 league season? Clearly, it’s the manager. And once again, it’s the wrong timing of the experiment and the hesitancy to trust other players and bring in rotation to the squad.

The cluelessness of the team on the field is all to be credited to Carlo Ancelloti, who simply appears not to care about the presence of any other forward other than Vinicius, Benzema, Rodrygo, and Asensio.

It was utterly disappointing to see Carlo Ancelloti so held back in using the experienced players like Eden Hazard and Gareth Bale, and strikers such as Luka Jovic. This led him to play a midfield of 4, with literally no one poaching and hunting for the goals.

The manager failed to realize that none amongst Vinicius and Rodrygo have played purely as a striker.

What’s ahead for the Los Blancos?

Real Madrid performed terribly against Barcelona. Ancelloti couldn’t figure out the formation, his players, and their positions. centre-backs were shuffled multiple times, and so were the right-backs and left-backs. The sheer desperation looked bad on players, and hopelessness gloomed over Real Madrid. It’s visible how this single defeat has affected the morale so much so that the little hopes of UCL title along with the almost certain league title seem to be fading now.

The incompatibility of the players to perform in Karim Benzema’s absence and youngster’s presence developed severely this season under Carlo and was a bomb that was bound to explode at some point, like the manager’s earlier stint at Real Madrid.

Against Barcelona, Real’s dependency and playing style compatible in Benzema’s absence got exposed and exploited. And with the Frenchman still due to return to the squad, Chelsea, just like Barcelona, won’t hold back either.

After playing Celta Vigo on the 2nd of April, Real Madrid faces the mighty challenge of Chelsea in the quarter-finals of UCL, which is a chance for Carlo Ancelloti to gain back the trust of the fans.

Benzema can’t realistically be expected to come back and score braces in and out whenever he returns from the injury, so Ancelloti must learn to trust the seniors on the bench. He must set up another striker for the two-legged round against the London team, otherwise, we shall be ready to witness more rounds of humiliation.

While Real Madrid has a comfortable lead at the top of the table, it can’t be read as an excuse to take things lightly. Experiments are necessary, but you have to trust your senior players as well, especially in crucial matches. Ancelloti can’t just forget Hazard’s contribution in the Supercopa.

With away games lined up in Sevilla and at Wanda Metropolitano, the team still has a long way to go in the league this season. While this may be seen as an overreaction, if the manager doesn’t change his style of formations and line-ups, we may as well say goodbye to the league very soon.