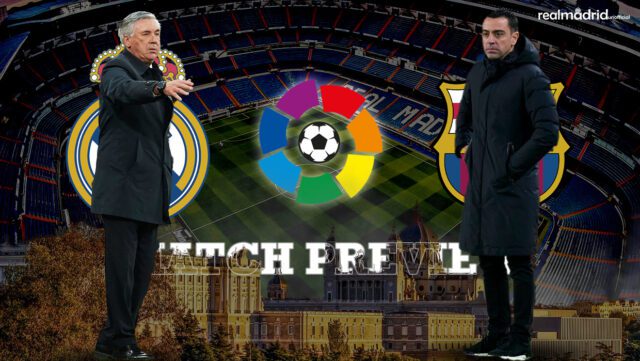 It’s been quite a long time since both Real Madrid and Barcelona faced each other with all two sides in great form. However, this week presents that opportunity again when Madrid welcome Barcelona to the Santiago Bernabeu.

Barcelona are on a good run of form after no defeat in their last 11 games across all competitions. Xavi Hernandez’s side have had the better of their opponents and that run of form has seen them earn a place in the last eight of the UEFA Europa League while also climbing to third on the league table.

Madrid, on the other hand, are on a five-game winning run since that loss to Paris Saint-German in the first leg of the Round of 16 Champions League.

The last time Barcelona beat Madrid in a league game was on March 2, 2019, with a 1-0 scoreline at the Santiago Bernabeu.

Since then, the Los Blancos have won four of the last five El Clasicos in the top-flight with the other ending in a goalless draw.

Madrid were the victors over Barcelona in the last meeting between these two in the league, with David Alaba and Lucas Vazquez scoring in a 2-1 away win while Sergio Aguero scored the consolation for the Catalan club.

This will be Xavi’s second game against Madrid as Barcelona’s manager, after losing the Spanish Super Cup semifinal earlier this year.

On any day with everyone fit, one will say Carlo Ancelotti’s side stand stall against the Blaugrana’s. However, with injuries setting in, Madrid have more or less like the second favourites although there is a low low possibility they have their top scorer back in time for the game.

Madrid used the counter-attack system against Barcelona in the first two meetings earlier in the season. With his usual 4-3-3, Ancelotti got the best from his players and the upsurge in form by Luka Modric, Madrid’s midfielder continues to be the key from the transition from the back to attack.

Barcelona have gone back to their possession football under Xavi, and although he has been there for less than a year, the players have already adapted to his philosophy.

Xavi would want his side to capitalise on Madrid’s lose spaces in the middle of the park and also chase the weakness in Nacho Fernandez’s game.

Barcelona know the importance of this encounter and they are aware it could make or break their domestic campaign.

Madrid are currently sweating on the fitness of Karim Benzema, who suffered an injury in the comeback win over PSG in midweek. Though tests carried out on Friday were positive, the forward is still a huge doubt for the game against Madrid’s fierce rivals.

Other players who could miss out through injuries are Ferland Mendy and Rodrygo Goes but the latter is likely to recover in time to face Barca.

Everyone else is available to be called upon by Carlo Ancelotti on Sunday.

For Barcelona, Sergino Dest picked up a knock in the Europa League win over Galatasaray on Thursday, making him a doubt to feature against Madrid. Gerard Pique is also doubtful for the encounter but nothing has been decided yet.

Abdessamad Ezzalzouli, Samuel Umtiti, Sergi Roberto and Ansu Fati are out due to injuries.

As mentioned earlier, expect the Los Blancos to not chase the ball with immediate pressure as they did in the game against Mallorca, beating them 3-0 away from home.

Barca will also come into the game looking to open up the spaces when they are in the Madrid half. They have the players to do that.

The midfield battle is one that you’d like to keep an eye on.