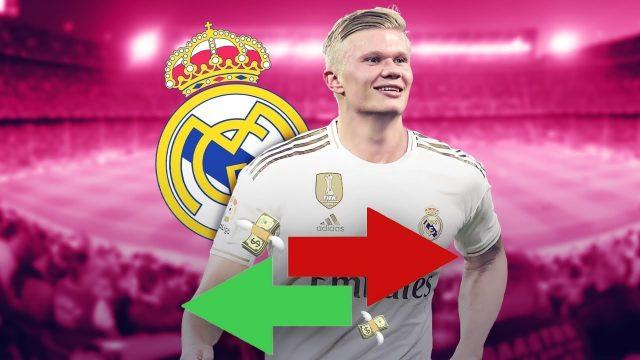 Former Byrne FK manager Alf Ingve Berntsen says Erling Haaland is “ready to play for Real Madrid”, adding that the Norway international and Karim Benzema can complement each other in the same team.

The one-time mentor of the 19-year-old, who was vital in his development as a player has expressed his desire to see the player play at Santiago Bernabeu.

Haaland has made the most of the 2019-20 campaign with his breakthrough unto the big stage and has not stopped since then.

The player became a hot asset in the January transfer window after scoring 28 goals across all competitions for Red Bulls Salzburg drawing attention from heavyweights such Paris Saint-Germain, Manchester United and the Spanish giants.

However, Borussia Dortmund were the lucky suitors as they wrapped up the signing of the teenager for a fee of around £18 million. He has been an instant hit for the Black & Yellow team, finding the back of net on 12 occasions in first 11 appearances.

His impact has still got Madrid following his situation with reports claiming that the club could even test Dortmund’s patience with an approach this summer, and Berntsen is hoping that he succeeds at the Bernabeu should any possible move materialise.

“If I were the coach of any of the five best teams in the world, I would buy him [Haaland] immediately,” Berntsen told Bernabeu Digital. “I think he is ready to play for Real Madrid and I think he could succeed there.

“Erling is only 19 years old and he can still improve in all facets and parts of the game.

“I think that if the great clubs don’t sign him… they may regret it later.”

Benzema has been the frontman for the Los Blancos for the past ten years with his style of play but Berntsen believes Haaland can be the perfect replacement for the Frenchman due to the technical abilities and his power in front of goal.

“Erling is strong and fast,” Berntsen added. “He has good technique and a great mentality.

“He is smart in the area, he scores many goals and he can give many assists. So I think he could play with Benzema.

“I think Haaland can play alongside another striker and, of course, he can play as a lone forward as well.”

The player is currently preparing to go again for the German side after the Bundesliga was given the greenlight to restart the season.