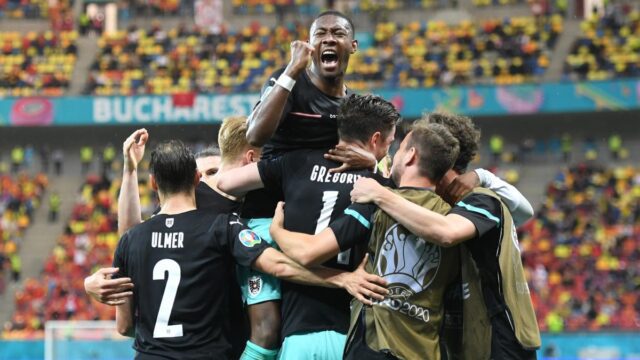 Two of Real Madrid’s players were in action in the UEFA Euro 2020 on Sunday afternoon as Luka Modric and David Alaba featured for their respective countries.

Modric played all 90 minutes in Croatia’s opening match against England at the Wembley stadium.

Despite his good showings on the pitch, the 35-year-old ended up on the losing side as Raheem Sterling’s goal proved to be the difference-maker.

Luka Modric ended the game with a 92.9% pass accuracy from 65 passes, playing two key passes into his teammates while also completing one of his two attempted dribbles.

The midfield maestro was by far the brightest Croatian player on the park and it was perhaps a shape to see him finish the game without at least a point for his country.

Alaba, on the other hand, captained Austria in their North Macedonia, beating the latter by three goals to one. The newly signed Madrid star was pushed to centre-back duties for Franco Foda’s side, joining a three-back of Aleksandar Dragovic and Martin Hinteregger.

The former Bayern Munich defender set up substitute Michael Gregoritsch for his side’s second while also ending up with the Star of the Match award.

Croatia will be in action again on Friday against the Czech Republic, in what is a crucial game for them while Austria will play the Netherlands in their next fixture on Thursday.