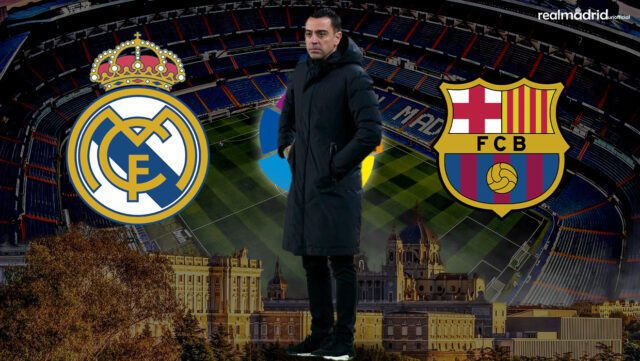 The El Classico over the years has been the most-watched football match in the world. The clash between these two Spanish giants Real Madrid & Barcelona promises to be a very entertaining and tricky one.

In total, the two rivals have met 183 times in La Liga with Real Madrid being superior over their arch-rivals in Spain. Madrid have recorded 76 wins and have drawn 35 times. Barcelona have won 72 times against Madrid in the Spanish top-flight league.

The last time Barcelona secured a win over the Los Blancos was in March 2019 and are in pole position to redeem themselves this time around to get their first win over since then.

Currently, Barcelona are in good shape and have an 11 match unbeaten streak across all competitions. The question is, will Real Madrid be able to end that winning streak?

We take a look at how Barcelona could lineup against Real Madrid in the El Classico.

Since the appointment of Club Legend Xavi Hernandez, the team has been transformed and are back to winning ways. The team’s performance has improved a lot in recent weeks.

The team cannot be predictable with respect to how they lineup in matches. Some positions especially in the attacking roles has got no guaranteed starters. But here is our Barcelona Predicted XI vs Real Madrid for El Clasico tomorrow:

Ter Stegen is expected to be the one to keep the pole safe despite his drop in form recently. His save percentage has dropped to 64.8% this season.

Pique and Araujo would certainly be the pair to fill the centre back spot at the heart of the defence for Barcelona. The pair has been Xavi’s most preferred men since his appointment. They have been very impressive in recent weeks. Pique has now been rejuvenated and plays very well despite feeling discomfort in his knee. His presence would provide enough experience in terms of organization at the back. Araujo has been rock solid and reliable since the start of the season.

With Dest sustaining an injury against Galatasaray in the Europa League on Thursday, Alves’ entry into the first eleven is now possible. Jordi Alba is expected to fill the left side of the defence. Alba has contributed to 8 goals on La Liga this season, scoring one and providing 7 assists. Alves has managed to score 1 goal and provided three assists.

Another option Xavi could have is to play Ronald Araujo as a right back in order for Eric Garcia to partner Gerald Pique in the centre halves position.

After resting De Jong against Osasuna last week, the Dutchman is expected to make a return to the starting lineup in La Liga as he did in the Europa. In recent weeks he has shown that he has what it takes to succeed at Barcelona. He was on target against Galatasaray as he provided an assist.

Young sensational midfielder Pedri once again would be very key to helping Barcelona in this fixture. The Spanish gem can break open any defence with his skillset. He alongside Busquets are most likely to start in midfield. Busquets has been the core player to protect the backline over the years and has so much experience in fixtures like this.

In situations where Xavi would want a four-man midfield, he can introduce Pablo Gavira to play as a false winger as he did against Atletico Madrid previous weeks ago.

There’s a difficult task ahead for Xavi to select his attackers on Sunday. Although Ferran Torres isn’t that clinical in front of goal, his contribution to the side cannot be overlooked. Torres in La liga has scored 3 goals, 2 assists in 7 matches. He’s expected to start alongside Aubamenyang who is in hot form. Aubamenyang has now scored seven goals in his last seven games across all competitions for Barcelona.

Frenchman Ousmane Dembele would be the key man for Barcelona this weekend. He has shown how important he is for Barcelona in recent weeks. Dembele has provided four assist in his last four games bringing his total for the season to seven.

The game has already started gaining euphoria and football fans around the globe are highly anticipating for the outcome of the game.

The match is scheduled to take place at the Santiago Bernabeu on 20th March, 22 at exactly 8:00pm.

Could Marco Asensio be a future Barcelona player?