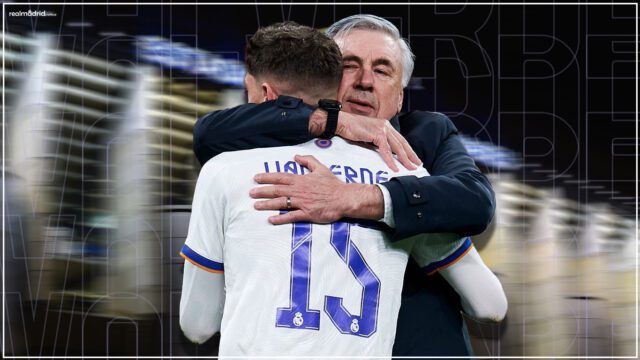 After having been directly involved in goals over the past three matches and already bragging a total of 4 goals and 2 assists over 9 appearances across all competitions, Valverde is making quite a few headlines recently.

But how did an 18-year-old Uruguayan youngster from Peñarol make it this far into the biggest stages of world football, more so, with a memorable assist in the UCL final?

As properly described by the La Liga commentator, our “FEDExpress” never seems to run out of breath. Picking the ball from Courtois in his own half to running down the right flank past numerous defenders and creating a chance in the ending moments of the game, is one of the things only Valverde can.

But calling him a good box-to-box midfielder with insane pace does injustice to him. He is also a great passer with unreal vision and also a very big goal threat. Almost impossible to stop when he is in his stride, Fede is also known for his driven shots from outside the box.

Although last season he has been quite unlucky in that department having rattled the crossbar for a net total of 17 times! Although this season the flood gates seem to have opened as seen from the screamers he scored vs Celta Vigo and RCD Mallorca.

Also looking at it from a statistical point of view, having an average of 89.7% passing accuracy and 1.9 key passes per game this season, he successfully ticks out most of the requirements asked of a modern midfielder.

But above all of this, the strongest attribute of Valverde is his mentality. Even if he’s injured or strategically benched for a specific game, he’s always ready to put in a real shift at whichever position Ancelotti asks him to play in. He reflects his immense will power and intensity no matter if he’s playing Liverpool or FC Sheriff. He plays like his life depends on it.

Rising through the ranks

Fede Valverde joined Real Madrid Castilla from FC Peñarol back in 2016 for a measly 5M€. Enjoying a good amount of minutes under Solari, he made his breakthrough for the first team in the 2017/18 season under Zizou who played him in a total of 25 games. Indeed a very big number for a debutant.

A lot of eyebrows were raised on Zidane when he decided to keep Valverde in the squad and parting ways with Marcos Llorente who at that time was rated much higher. But time has proved otherwise. From being a key player in the squad of Zidane to now playing a pivotal role in Carlo Ancelotti’s squad, Valverde has earned every success in his career so far through hard work and determination.

But in a team like Real Madrid, it’s hard to keep your position as a rotation player, let alone a starter. That is where Valverde’s intensity comes into play. He can play in any role the Mister asks of him, so filling in for either Bale or Carvajal when they were injured, and displaying his versatility in each role he has been played in has been a piece of cake for Fede, given his qualities.

With Casemiro gone to Manchester United and the legendary trio of Kroos-Casemiro-Modric getting broken, it’s been even easier for him to start games this season. The transition of Real Midfield from the maestros, slowly into the hands of the youngsters – Valverde, Camavinga and Tchouameni under the leadership of our “El Halcon” – Valverde, is what every madridistas’ eyes would be on, this season.

MUST READ: Dani Ceballos – A blessing in disguise for Carlo and the top-whites?

PHOTOS: Real Madrid squad in Glasgow ahead of Champions League match vs Celtic