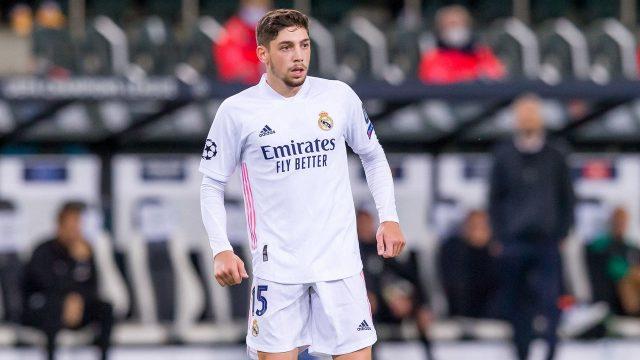 Real Madrid midfielder Federico Valverde is not expected to be in action anytime soon unless at least during the Christmas period.

The Uruguay international has been in the sidelines since the defeat to Valencia earlier this month and has already missed games against Villarreal and Inter Milan after the international break.

And now Marca reports that the player’s return will be take a little longer period than first thought after the scans carried out.

According to Marca, Federico Valverde will be out for longer than the initially reported 4 weeks.

The midfielder aims to be fully fit in time for the Madrid derby in the second weekend of December.

Valverde is said to be carrying on with his recovery and has already started walking slowly with the support of the clutches while he is also able to put some pressure in his right leg.

However, he is a long way off returning to full training as well as sprinting without any restrictions.

The 22-year-old’s absence would be a huge loss for manager Zinedine Zidane, considering the amount of space the Uruguayan covers anytime he is on the pitch.

Valverde has started in nine out of the 11 games he’s played so far across all competitions and has stamped his authority on the game anytime he has been given the chance to play.

If the reports from the Spanish paper is to be believed, then Valverde could be set to miss at least four more La Liga games in addition UEFA Champions League games against Shakhtar Donetsk and Borussia Mönchengladbach respectively.