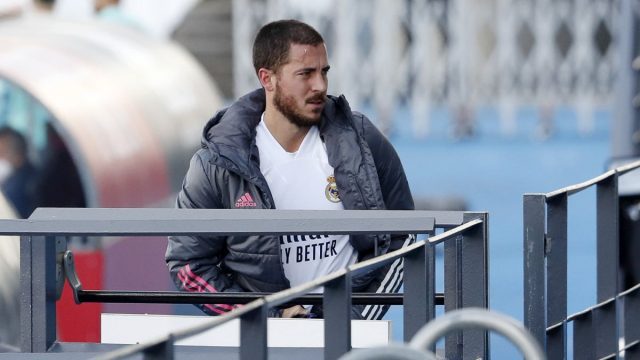 Games like this – the UEFA Champions League tie against Liverpool, is what you always want to see your best players come out and prove their quality. That may be exactly what Eden Hazard would be looking to do in midweek.

When the news of his last injury popped up, it was quite no surprise that many had given up on seeing the best of home till the end of the season. There were even reports he could be set for another test under the knives and that could see him sit out this summer’s Euros.

However, just like the ‘Garden of Eden’ which proved to be a way for humans when they were first created, Eden Hazard resorted to Belgium’s physiotherapist Lieven Maesschalk, under whose guidance the player has seen a miraculous recovery.

Eden Hazard joined full training with the squad during the latter part of last week but the game against Eibar on Saturday was too early for Zinedine Zidane to unleash.

Well, ‘unleashing’ may too exaggerated but for a player like Hazard, seeing him play to his best is always a dangerous sight.

Zidane confirmed that he could feature against Liverpool but was very confident he will play against Barcelona in the next La Liga fixture.

The Belgium international has not had the best of luck since his move to Santiago Bernabeu but there is some optimism in his that he could be getting closer to his best very soon.

And for him to repay the faith shown in him, the game against the current Premier League champions in the Champions League is the biggest stage for him to prove that.

With the current form of Vinicius Junior, it’s never an easy task for Hazard to walk straight into the team but a good exhibition in the midweek’s game will definitely provide for him the basis to state a claim.

Until then, we hope the ‘Garden of Eden’ really becomes a favourite phrase at the club!