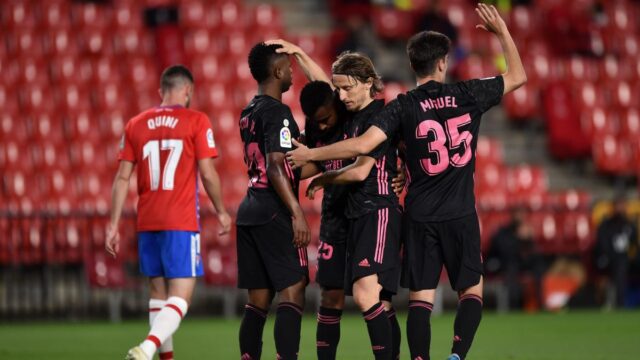 Real Madrid saw off Granada in a comfortable on Thursday night as they closed the gap on Atletico Madrid in the Spanish La Liga.

Luka Modric, Rodrygo Goes, Alvaro Odriozola and Karim Benzema were all on the scoresheet as Madrid swept aside Diego Martinez’s men.

Madrid beat the home team by four goals to one as their unbeaten record against Granada in La Liga continued.

Modric opened the scoring in Thursday’s fixture after 17 minutes played when he put the ball through the legs of Rui Silva on his near post after receiving a pass from Miguel Gutierrez.

The away side doubled their lead just before the halftime break when Rodrygo went on a run after being played through on goal by Marwin Park before striking the ball into the net. The goal was Brazil international’s first league goal of the 2020/21 season.

Real Madrid went into the break with a 2-0 lead and were on course to wrap up all three points but Jorge Molina pulled one back for Granada in the 71st minute of the game to make it 2-1.

Substitutes Eden Hazard and Odriozola combined perfectly to restore the two-goal advantage four minutes later before Karim Benzema put the game beyond the reach of Granada.

The win means Madrid are back in the second position with 78 points, two behind Atletico who are on 80 with two games left to be played.

Madrid will take on Athletic Bilbao in their next league game before rounding things up against Villarreal on match-day 38.