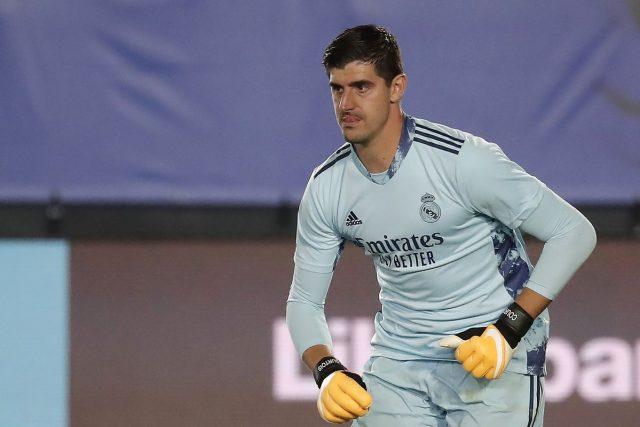 Real Madrid goalkeeper Thibaut Courtois has claimed his teammate Eden Hazard is unhappy about his ongoing fitness issues as he is set for another time on the sidelines.

The Belgium shot-stopper was speaking to the press after his side’s 1-0 win over Real Valladolid on matchday four of the 2020/21 La Liga campaign.

Courtois was acknowledged for his impressive display in goal for Zinedine Zidane’s men as they managed to record their first victory at home this season at the Alfredo Di Stefano Stadium on Wednesday.

“We knew this would be a tough game,” he said. Last year they managed to score the equaliser during the last few minutes of the game. In the first half they didn’t create many chances, but they did so in the second and I had to make three good saves.”

Courtois was also quizzed on the selections by the gaffer which seemed to have surprised almost everyone with Luka Jovic handed a second consecutive start while Isco was also introduced into the starting lineup.

He added: “With these chances you can surprise the opponent if you’re flexible but you also need to have pace. The thing is we have to do what the coach tells us to do, that’s what we did in the second half and we could’ve scored some more goals in that stretch.”

The 28-year-old discussed the frustrating situation of Hazard, who is understood to have picked up a muscle injury just hours before he was in line to make his first appearance this campaign.

“He’s a bit sad, because he was training very well this whole week and was looking forward to coming back. He had his usual speed, the one I know. This injury is a bit of a set setback, but at least it’s not related to his ankle,” the goalkeeper concluded.

Los Blancos will play Levante in their next game on Sunday before the international break.