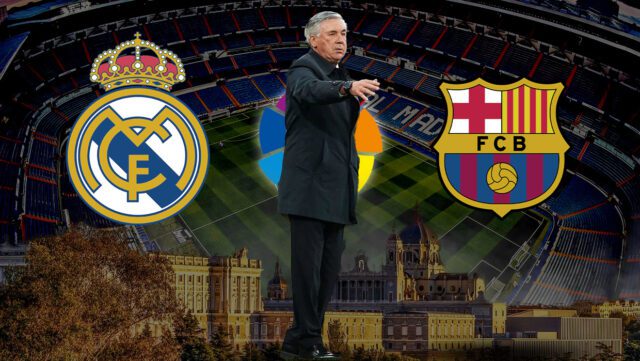 The stage is all set for the two giants to fight for the second time this season in the Spanish league, and at stake are the crucial three points and continuation of the unbeaten run of both sides. It’s time for the 282nd battle between Real Madrid and FC Barcelona. A rivalry so strong and fierce that it divides the world into two.

Barcelona’s recent record against Real hasn’t been too pleasing. The team hasn’t won against the Galacticos since 2019. While seeing their recent form under their new manager and team’s legend Xavi, many were betting on Barcelona to win the second league Clasico of the season. But after witnessing Real’s turnaround against PSG in the UCL, stakes have changed.

Real Madrid’s dominant performance at home in the UCL has revived the team from over a nearly two-month-long slump. And with the team’s squad’s mighty confidence in the league, the Royal Whites shall never be taken lightly.

Real’s boss Carlo Ancelloti hasn’t experimented much with the squad like his predecessor Zinedine Zidane. Ancelloti likes to start his trusted players in and out so much so that players started to look visibly exhausted going on to the field. While the formula for success might’ve worked so far, it could be doomed to repeat his earlier stint at Real when the players lined up with injuries towards the end of the season.

At the moment, the team has one absentee: Ferland Mendy, and one uncertain: Karim Benzema.

The Belgian keeper has started all the games in the league so far, and has been phenomenal and overlooked by the media for his solid performances. The keeper has had 12 clean sheets this season out of 28 games and a 78.4% saving rate against his Barca counterpart Ter Stegen’s 64.8%.

It’s a no-brainer that in the absence of the full-time left-back Ferland Mendy, David Alaba will fill in his shoes. Alaba is an experience LB and has performed just as efficiently there as he has as a CB. And since Alaba moves to the left of the field, Nacho Fernandez steps in to cover his place alongside the Brazilian CB Eder Militao, who missed on the trip to Mallorca after catching the flu. The Brazilian returned to the training and looks fit to start.

Dani Carvajal is expected to start ahead of Lucas Vazquez, as Real would prefer more experience on the right. However, it won’t be surprising either if Lucas starts over Dani, as he did in Mallorca.

The holy trio is expected to start in the giant fixture. Ancelloti has relied upon the experienced and the three-peat winning midfield. No amount of praise would ever be sufficient for them all. The chemistry and the experience of these will be unmatchable, and seeing their current forms, it’ll be a no-brainer to start them. Modric, who didn’t start against Mallorca in the last game, will start fresh and powerful.

For the substitutes, we might see Fede Valverde and Eduardo Camavinga coming in the later stages of the game, but other than that, Carlo wouldn’t try to field the young guns at the start.

Going into Clasico, Real Madrid would be missing the ace Karim Benzema, who after picking up an injury against Mallorca, didn’t train with the team. While he could’ve been made available for the squad, the team wouldn’t find it appropriate to risk Karim when two crucial matches against Chelsea are lined up in UCL.

Vinicius Jr is an absolute favourite to start. The Brazilian has been in tremendous form, and the boss wouldn’t want him to rest for the game as big as this and shall be the main man in the attack.

However, it’s hard to predict who’ll be filling Benzema’s shoes. Ancelloti has made it clear that he isn’t willing to play Eden Hazard. But of all the options at his hand, Hazard seems most plausible. The Belgian has played for 686 minutes in the league. The other choice would be Luka Jovic, who we may see coming on in the second half.

Marco Asensio should be starting on the right over Rodrygo given his current form and goal-scoring spree.