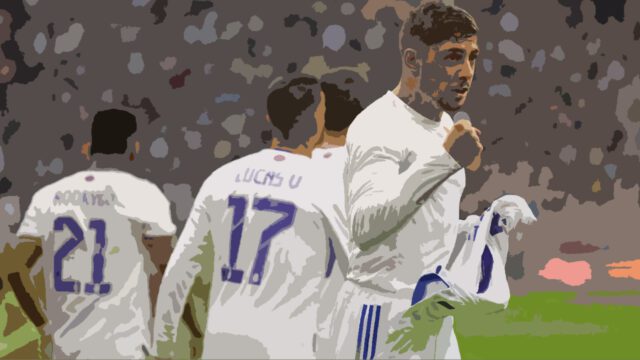 The two-legged battle between Real Madrid, The Kings of Europe, and Chelsea, The Reigning UCL Champions, ended in a spectacular fashion with Karim Benzema’s headed goal, something which also opened the scoreline of this tie. And one of the instrumental players for Real was Federico Valverde.

Fede Valverde – The golden boy of Madrid. Ahead of everyone else by miles. The man had been phenomenal and vital to the squad against Chelsea in both legs despite not starting in the first leg at the Stamford Bridge.

His contribution, in all departments of the field, was at par with every other senior player’s. He made defending and attacking strong together, thanks to his cyborg-like stamina, which could be summed by this piece after the second leg: Fede Valverde has been running around for 110 minutes, just blazed past Christian Pulisic, who has been running around for 27 minutes, lost the ball, turned round, ran back, and then sprinted past him again to regain possession. There’s a good chance he’s a cyborg.

Federico has become such a reliable player for the squad that he can play in the middle of the park as well as on the right in the front three. His improvement on the right flank is underrated. Valverde’s numbers have been best on that side of the pitch in many aspects. Progressively and evidently, he has probably become the first-choice RW for the team. It was until his presence and run on the right that Rodrygo was considered the best of the lot, with the other two being Marco Asensio and Gareth Bale.

This was also highlighted in Ancelloti’s game plan. Fede started on the right in both games, alongside Benzema and Vinicius.

Now, let’s have a look at Federico Valverde’s performance against Chelsea leg-wise:

During the first leg in London, Fede was a tank in defence and a machine gun on the offence. He made sure that Carvajal always had someone on his side whenever the gameplay switched down the park. He made runs from the opposite side of the pitch to defend against the Blues every time the ball was played long.

Partnering with Casemiro, the Uruguayan helped contain the attacking midfielders of Chelsea. The work rate was phenomenal as he also provided himself as an option in the front three. He combined plenty of times with Benzema to start an attack and matched Vinicius to place himself as an option for Madrid and a danger for Chelsea.

Fede Valverde started in the same position in the second leg as well, with almost an identical line-up, which only saw one change in the defence where Nacho came in for Militao.

Even though he didn’t have more impact than he had in the first leg, he was elemental to the squad overall, providing the counter pace and energy against Chelsea. When Rodrygo was subbed in for Casemiro, Fede naturally moved to the midfield. He maintained that balance on the field for the team, by not only allowing Rodrygo to come in with fresher legs on the right but also by being a solid defending alternate of Casemiro.

His return to the center allowed Modric to be freer, which eventually brought the first goal for Madrid when Rodygro volleyed an exquisite pass from the Croatian.

All in all, Fede Valverde is a gem and a blessing for all the Madridistas. His passion, his work rate, and his talent are unreal. He moulds himself into something that makes other players in white more confident of their abilities. The squad is always assured of his support, and no one is left alone by the Uruguayan. No one.