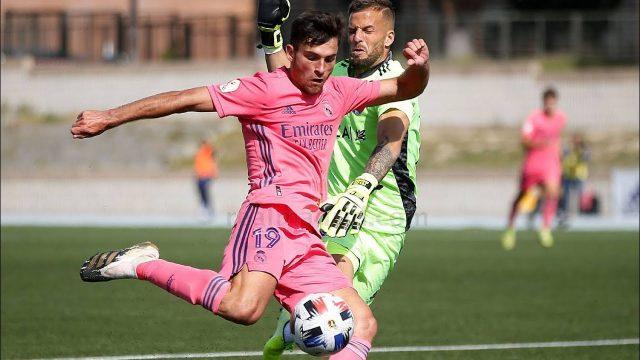 Hugo Duro could be making a step into the first team at Real Madrid sooner than he expected after Luka Jovic was allowed to leave the club earlier this week.

Jovic returned to his former club Eintracht Frankfurt after failing to nail down a starting berth in Zinedine Zidane’s set up at the Santiago Bernabeu, which is believed to have left him frustrated.

His departure has left the club short of options in the attacking department, with Karim Benzema and Mariano Diaz the only options as of now.

To make things look worse, Mariano has not got the trust of the manager, with the Frenchman giving him just 275 minutes of game time so far in the 2020/21 campaign. However, there could soon be an answer to the many questions of a troubling attack that Madrid have got at their disposal for the time being. The solution – Hugo Duro.

The 21-year-old has impressed heavily for the Castilla side since making an initial loan move to the Santiago Bernabeu from Getafe last summer.

He has made himself available all the time for Raul’s side, starting seven out of their eight league games in Segunda División B, the third tier of Spanish league football with his only absence coming when he was handed the opportunity to be involved with the first team.

Hugo Duro has notched up five goals in 614 minutes so far and looks very lethal in front of goal.

His eye for goal and his fighting spirit could be exactly what Zinedine Zidane is craving for but it still remains uncertain whether the gaffer will be willing to grant such an opportunity to a player of Duro’s age.

The Getafe loanee is regarded as part of the future projections of the Los Blancos team, with the latter holding an option to buy him at the end of his loan spell.

In the absence of Jovic, this could be the perfect time for Madrid to test the qualities of Hugo Duro and there is a bit of optimism that he could do a bit better when enrolled gradually into the first team.